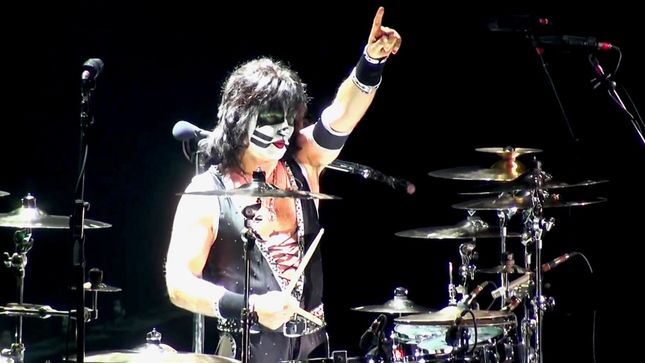 In a new interview with Rock Music Star, KISS drummer Eric Singer is asked who has the final say in KISS?

"People always think it’s Gene (Simmons)," says Eric. "Respectfully, Gene and Paul (Stanley) do the thing together, but I always tell people, it’s not what you think. Nothing happens in KISS without Paul Stanley saying, 'Yay.' There’s some times when Paul doesn’t care about something, and says, 'Yeah, I don’t care. Whatever.' Put it this way, if Gene wants to do it, and Eric and Tommy want to do it, and everybody else… if Paul doesn’t want to do something, we’re not doing it. If Paul wants to do it and Gene doesn’t, Gene usually says, 'Okay, whatever.' Gene usually just wants to play. He just wants to keep doing whatever we do. So, there is that."

In a recent interview with Sweden's Expressen, Gene Simmons revealed that KISS will embark on a three-year tour, beginning in January 2019.

According to Simmons, the trek will be the band's "most spectacular tour ever", and will cover all continents. Details to follow.