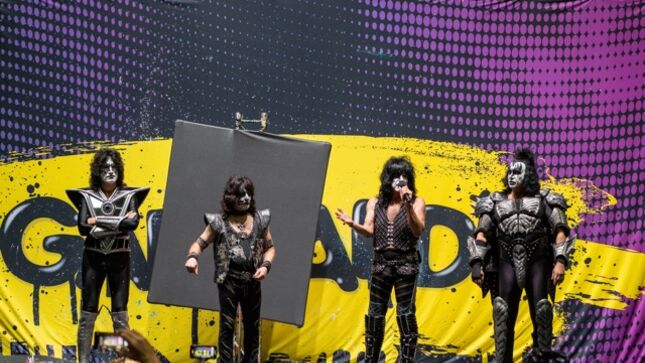 KISS farewell trek originally launched in January 2019 - and forced to put it on hold last year due to the COVID-19 pandemic – hit another obstacle in its current run when last night’s show at the iThink Financial Amphitheater in West Palm Beach had to be postponed due to the severe weather conditions affecting the area.

The band was scheduled to hit the stage around 8:45 PM, but weather quickly started to deteriorate around 7:30 PM, before Garibaldi – the painter who has been the opener for the shows – even appeared on stage. Venue officials asked the crowds occupying the amphitheater’s hill to seek shelter in the covered area of the venue or even their cars, as the tropical storm was about to get serious.

Heavy rains and lightning continued for another 2 and half hours, and around 10:00 PM the four members of KISS come up on stage to announce the show postponement. Paul Stanley addressed the audience and said: “We are bummed we cannot play for you tonight, but this isn’t safe and safety is a priority. Look at us, we are ready! But you all live here and you know this isn’t safe. Hold on to your tickets, on November 5th, which I believe is a Saturday we are coming back. Thank you for patiently wait for us, we’ll see you all them!”

End Of The Road was originally scheduled to conclude on July 17, 2021 in New York City but has since been extended to at least the end of 2022. The trek was resumed this August 18th at the Xfinity Center in Mansfield, Massachusetts, which marked KISS's first full-length live appearance in front of an audience since March 2020.
The tour was originally was announced in September 2018 following a KISS performance of the band's classic song "Detroit Rock City" on "America's Got Talent". Produced by Live Nation, the rest of the tour dates remain unchanged. All previously purchased tickets and VIP packages will be honored for the new dates. More information will be e-mailed to ticketholders directly.

KISS's current lineup consists of original members Stanley and Simmons, alongside later band additions, guitarist Tommy Thayer (since 2002) and drummer Eric Singer (on and off since 1991).