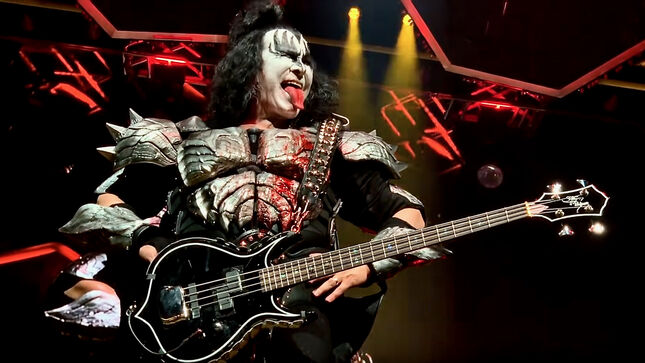 In a new interview with Guitar World, KISS singer/bassist Gene Simmons discuss new Gibson, Epiphone, and Kramer instruments, and breaking the world record for most pyrotechnics at a gig on December 31, 2020, when KISS played an outdoor show at Atlantis in Dubai.

“Yeah. People think it’s about beer, no, the Guinness Book Of Records isn’t about beer – they keep track of records," says Simmond. "The usual gigs are child’s play compared to the Dubai thing. Usually, there is a ceiling, but here you can go 100 to 300 feet above the stage, and we did.

“No-one really talks about it much, but the enormous heat from the 40 big projectiles we had was just scary, I have to say. I will say one thing. No matter how difficult it is, we are the hardest-working band in show business, but we do have an awful lot of fun. I have more fun than the Pope does!"

Celebrating the success of one of the most iconic bands of all time, KISS will take the stage for a special performance at the 2021 Tribeca Festival in New York City. For the first time ever, the band will perform at the festival directly following the screening of Part One of their new A&E documentary, Biography: KISStory. The two-part documentary event is part of the Festival’s 2021 TV lineup.

Founding members Paul Stanley and Gene Simmons will be joined by current band members Tommy Thayer and Eric Singer for a multi-song, live, performance at the event. The concert, at a currently undisclosed location, is announced on the heels of the news of the definitive A&E documentary Biography: KISStory which is set to premiere with a two-night event on June 27 and June 28 from 9 - 11 PM, ET.

Festival passes are on sale now. Tickets to attend the outdoor in-person screening / events are available starting today, Monday, May 10 at 11 AM, EST. More info here.