KISS Frontman PAUL STANLEY Talks Staying In Shape As A Performer - "You Might Be Able To Lift Really Heavy Weights, But That's Not Gonna Mean Squat When You're On Stage" 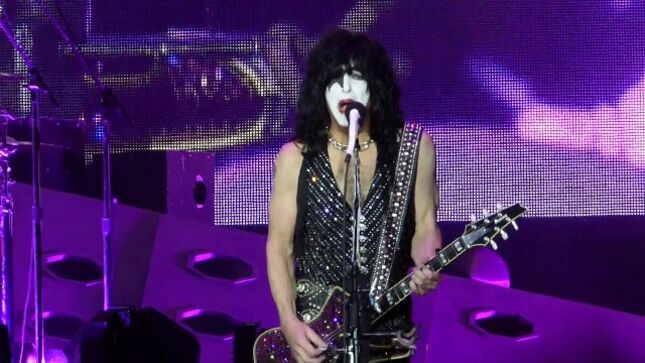 Variety has published a story on how musicians can stay in shape during the ongoing pandemic for when touring finally returns. The  piece features an interview with KISS frontman Paul Stanley, who is 69. Following is an excerpt.

Stanley: "The best way to be in shape is to be in shape, and once you get there, stay there. Once you have that momentum, it’s much easier to maintain than to create."

Stanley notes that building the strength and endurance needed for a long and energetic performance, night after night for months on end, has little to do with stereotypical notions of bodybuilding. "You might be able to lift really heavy weights, but that’s not gonna mean squat when you’re on stage," he says. "Your aerobic capacity and core strength are really what it’s all about — and the size of your muscles can actually become a detriment, because endurance is based on cardio fitness."

Unlike many of his contemporaries from the decadent 1970s, the KISS singer eschewed most excesses and began working with a trainer in his early 30s. "When you’re young you’re fairly invincible," he says, "but as you get a bit older, things just don’t come as easily — and they go very easily."

Stanley has used lockdown to get in even better shape: He recently released an album with his ‘60s-style R&B outfit Soul Station, and, "During COVID, I’ve been bike-riding 25 miles, three times a week," he says. "That’s a great aerobic workout, and it’s also a great core workout, because you’re leaning forward on your bike and tensing you abdomen and your back, and of course it’s great for your legs. Along with some light weights, you really don’t need much more than that."

On February 5th, Paul Stanley’s Soul Station announced their forthcoming album, Now And Then. has officially been set for release on March 19 via UMe, available for pre-order here.

A collection of nine classic soul covers and five original tracks, Now And Then will feature the band’s acclaimed version of Five Stairsteps’ “O-O-H Child” as well as their take on The Spinners, “Could It Be I’m Falling In Love,” which is available today.

Listen to “Could It Be I’m Falling In Love” here, and below:

Now set for release on March 19, Now And Then is the first-ever full-length album from Soul Station: A band gathering some of today’s leading musicians to pay tribute to the greatest artists and songs from the R&B and soul catalog to keep this vital music current.  While a surprise to many, Stanley’s early pivotal roots in this music has quietly turned this passion into a celebrated touring and recording band.  Stanley’s 15-piece ensemble group has toured the U.S. and Japan, but it wasn’t until recently that they were able to get in the studio together and record Now And Then.