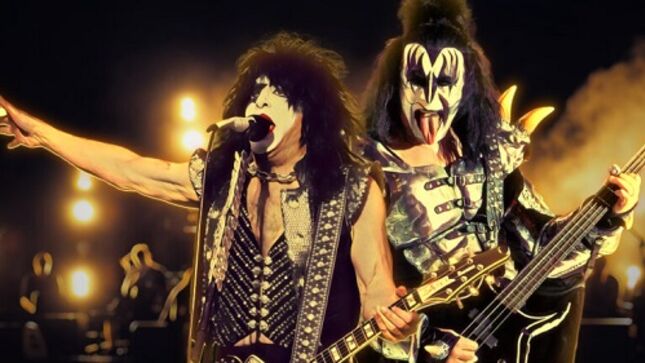 This Saturday, February 12 at 8pm ET, KISS vocalist / bassist Gene Simmons and vocalist / guitarist Paul Stanley will be featured in an all-new episode of the Reelz series Frontman. The show bio reads:

KISS - A band is almost always defined by its frontman and normally there is only one of them – ego, talent & chemistry demand it. But KISS is different. They have two frontmen: Gene Simmons and Paul Stanley who somehow shared the limelight, and gave us a spectacle like no other - fire bombs, smoking guitars and spitting blood were all part of the act. Both their backgrounds were scarred by childhood trauma and together they created alter-egos named the Demon and the Starchild, masked characters that would take on the world. But hiding behind their personas was a recipe for disaster. This is the story of how two of the most legendary frontmen managed to share a vision and a stage forming a band that became one of the best-selling rock n roll acts of all time, selling more than 100 million records worldwide.

In Radar's sneak peek of Reelz's upcoming documentary, KISS Frontmen: Gene Simmons & Paul Stanley, Larry Mazer, who managed the group from 1989 to 1994, comments, "I think people accepted right away that this is what this band is: there's two lead singers."

Mazer goes on to describe how they differed. "Gene Simmons, he's the one who spit fire during the song, 'Firehouse'. And Paul did all the talking, Paul did all the raps between songs. So he was more of the typical frontman, whereas Gene was the 'Demon'."