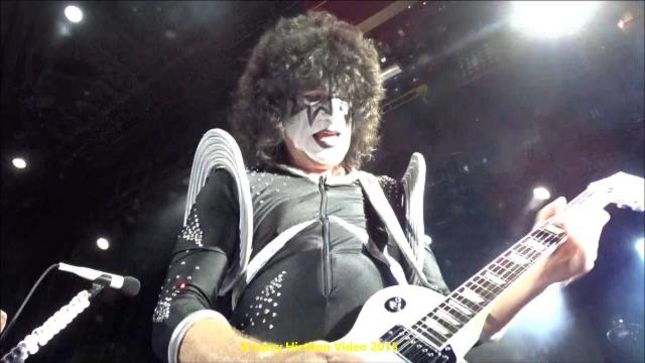 KISS guitarist Tommy Thayer received a doctorate of humane letters degree from Pacific University and delivered the commencement address at Pacific’s spring graduation ceremony on Saturday, May 19th at Hanson Stadium in Forest Grove, Oregon. He recently spoke with PortlandTribune.com about the honour, his KISS bandmates, his career leading up to joining KISS, his Oregon Military Museum project, and his Ernest Hummingbird book.

Q: What is the blood-spitting, fire-breathing Gene Simmons like?

Thayer: "Gene's a hard-working, very ambitious person. When you really get to know him he's a sweetheart. You know (he) kind of comes off with a tough exterior sometimes. He can be a little abrasive in some ways but he's a guy I've known a long time and he's actually been a great mentor to me."

Tommy has served on Pacific’s Board of Trustees since 2005 and through his philanthropic leadership has helped the university generate more than $3.5 million for its NCAA Division III intercollegiate athletics programs directly benefiting thousands of Pacific student-athletes.