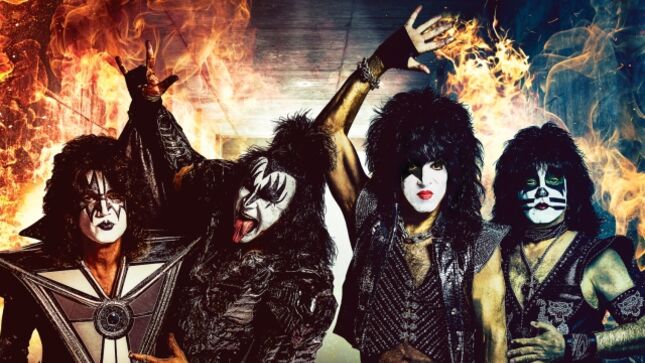 This past August, KISS announced a 12-show residency at Zappos Theater at Planet Hollywood in Las Vegas, Nevada, running December 29, 2021 through February 5, 2022. Then in October, the residency was cancelled without explanation, and refunds were given to ticketholders.

Now, KISS manager Doc McGhee, appearing on The Rock Experience with Mike Brunn, sets the record straight. According to Doc:

"When we did it, I said we're gonna go until November 1st and see if we can get the people in from Europe. We have one chance for people to come to Vegas to see us because Gene (Simmons) and Paul (Stanley) will not tour after this year; they're gonna be done. So when we couldn't get the people in, and the restrictions were there, I said, 'We don't have to do it now.' We talked about it: 'Let's do it later on down the road when everybody gets a chance to see a different section of KISS.' This isn't KISS, the stage show that we have today, this isn't KISS 2.0 or any of that stuff — this will be a whole different vibe that people wanna come. And we're gonna do 12 shows. Let people be able to come and see 'em for the last time in Vegas. It was hard enough on the Kruise — 174 people couldn't come (because of COVID travel restrictions); 174 cabins, like 300 people."

Asked when the KISS Vegas residency might happen, Doc replied: "I think it's gonna be in, like, August (2022). It'll be either August or October. We're checking it out now."

McGhee also spoke about the looming final show of KISS' End Of The Road farewell tour, which was originally set to conclude on July 17, 2021 in New York City, but has been pushed to at least the end of 2022. "Obviously, it's gotta be New York — somewhere in New York. If we're doing after September, then there's only a few places to play; you've got to play the Garden. So we're still kind of mapping it out, because we were supposed to end at Citi Field this past July. And with the pandemic, we couldn't do any of that. And because of the heavy touring commitments that everybody's put on in '22, 'cause everybody's been off for two years — everybody wants to go out — so it's hard to get dates and all that kind of stuff."