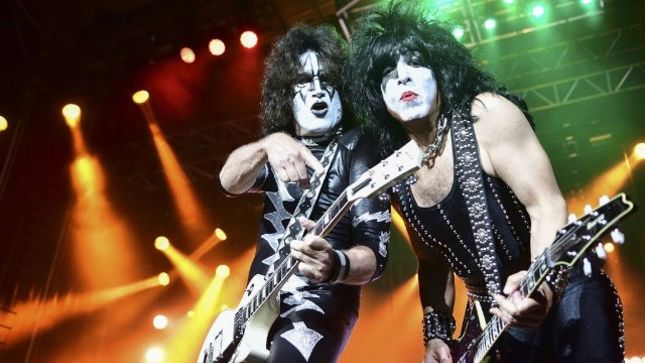 Courtesy of the XTV Podcast, multi-camera footage of KISS' July 8th show in Madrid, Spain is available below. The setlist on the night was as follows:

Dynamite is thrilled to announce a new comic book series featuring KISS. Writer Bryan Edward Hill (Detective Comics, Postal) and artist Rodney Buchemi (Death of Hawkman) crank the volume high as they bring you the KISS series we have all been waiting for this October.

In KISS: Blood And Stardust, an immortal cabal is taking the lives of innocents and the only ones who can stop them are KISS! The only problem…they are dead. And now they have to make a deal with a demon to save their souls and return to Earth to fight evil!

"KISS was the soundtrack of a time in my life where I had tons of ambition and few rules. Endless nights in dive bars in New York City, watching sunrises on the rooftops of Brooklyn. I might have discovered them in the aughts, but I was filled with the spirit of the 70's,” remarked author Bryan Hill. "The 1970's was a special decade, a decade of fame and magic where guitar riffs and drum solos were your co-pilots and the devil MAY have cared, but he couldn't stop your shine. "

"As one of rock's most celebrated bands, KISS continues to be a staple in the comic book industry," said Nick Barrucci, CEO and Publisher of Dynamite Entertainment. "Bryan Hill has really built a name for himself, so we’re thrilled to have him penning KISS: Blood & Stardust as part of our fall lineup."

The origins of KISS comic books date almost as far back as the inception as the band itself, having been an integral part of comics culture since their 1977 appearance in Howard the Duck #12 and 1978's Marvel Comics Super Special: KISS. Today, nearly 40 years later, Dynamite Entertainment is the proud home to the comic book series KISS, KISS: The Demon, KISS/Vampirella, KISS/Army of Darkness and now KISS: Blood & Stardust.

Dynamite Entertainment is bringing a Deluxe-Premiere trading card set to specialty retailers this fall, featuring a select group of KISS’s fan-favorite photos and artists portraying the world-renown rock band in all their glory, plus Gene Simmons and Paul Stanley signed cards.

“KISS trading cards are some of the most collectible memorabilia out there, they’ve been around since the early days of the band,” said KISS co-founder Gene Simmons. “These new cards add to the tradition and the lore of KISS and I can’t wait for fans to get their hands on them.”

“KISS continues to be one of the greatest bands of the century, their logo, makeup and songs are instantly recognizable and after 40 years, fans are collecting their memorabilia more than ever,” said Nick Barrucci, CEO and Publisher of Dynamite Entertainment. “We’ve been publishing KISS comics, but the fans wanted more so now we give you the hottest trading card set on shelves this fall!”

The KISS Deluxe Ultra-Premium Trading Card Set will be solicited in Diamond Comic Distributors’ August 2018 Previews catalog, the premier source of merchandise for the comic book specialty market, and slated for release in October.