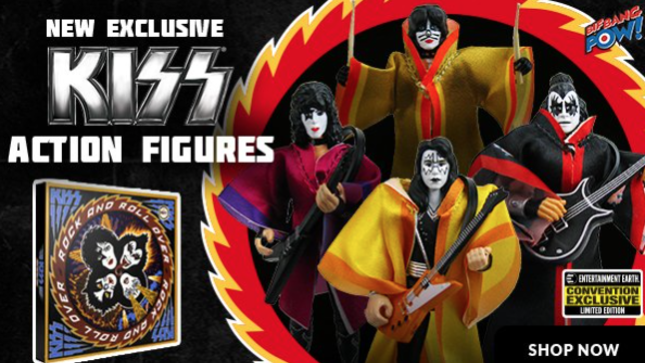 Entertainment Earth has just announced the arrival of the KISS Rock and Roll Over 3 3/4-Inch Action Figure Deluxe Box Set.

- Exclusive 3 3/4-inch action figures of The Starchild, The Demon, The Spaceman, and The Catman!
- Featuring kimonos and makeup inspired by photographs from the band's first tour to Japan.
- Each figure sports 11 points of articulation and his specific instrument.
- The box looks just like the 1976 platinum album Rock and Roll Over!
- Individually numbered limited edition of only 1,000 pieces!


According to a press release: “Packaged in an amazing box that looks just like the 1976 platinum album Rock and Roll Over, this fantastic KISS Rock and Roll Over 3 3/4-Inch Action Figure Deluxe Box Set - Convention Exclusive from Bif Bang Pow! includes four super-detailed action figures. The Starchild, The Demon, and The Spaceman bring their guitars, and Catman comes ready with his drumsticks. The Rock and Roll Over Tour marked the first time KISS performed in Japan, so these plastic figures feature the band in accurate character-specific fabric kimonos and makeup! They all sport 11 points of articulation (neck, shoulders, biceps, elbows, hips, and knees). This limited edition of only 1,000 pieces is individually numbered with a holographic sticker. Bring the entire band into your home for a command performance! Ages 14 and up.”