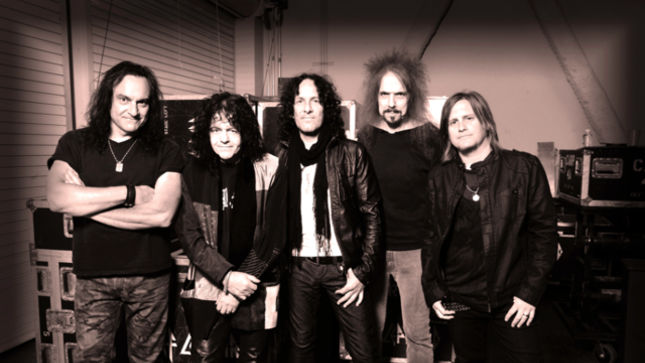 When he left Black Sabbath in early 1982 to form his own band, the late, great Ronnie James Dio took powerhouse Black Sabbath drummer, Vinny Appice with him.

Ronnie knew that he wanted a European flavor to balance-out the band, so he asked his former Rainbow bandmate and Scottish native, bassist Jimmy Bain to join him. In turn, Jimmy recommended a young Irish guitarist, Vivian Campbell to complete the line-up. When the four of them met and played for the first time in a North London rehearsal room in September 1982, the magic was evident and the classic Dio band line-up was born.

Between 1983 and 1985, in quick succession, that line-up wrote, recorded and toured the first three Dio albums. Widely considered to be the crown jewels of the Dio catalogue, Holy Diver, Last In Line and Sacred Heart went on to sell millions as the band, now reinforced by keyboard player, Claude Schnell, played to audiences worldwide.

By 1985, however, trouble was brewing and the fabric of the band had started to unravel. Beginning with Vivian Campbell’s firing during the Sacred Heart tour, one by one the other original band members left the fold and slowly the magic was lost.

30 years after the recording of Holy Diver, and without trying to replace the singular sound that was Ronnie’s voice, the original band have started playing the songs they created together again. Joined by the passionate, powerful and unique voice of vocalist Andrew Freeman, Vivian Campbell, Vinny Appice, Jimmy Bain and Claude Schnell have united under the name of their classic album, Last In Line, to perform and tour their original songs again.

Frontiers plans to release the new recording in the spring of 2015. Stay tuned for updates.