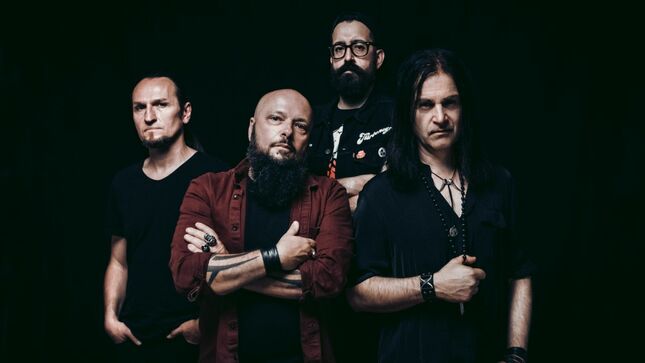 After crushing the metal world with their recent single “I Don't Wanna Be Your God”, Last Temptation are back with another new metal anthem “Ashes And Fire”, which is accompanied by a sizzling video clip, is out now via Crusader Records.

“Ashes And Fire” is about people who want to be the centre of the universe, no matter what it takes. People who feel the need to attract views to flatter their egos. No price is too big for these people. Killing people, killing the Earth, and everything that goes along with it, as long as they get attention.

The track is chunky and groove laden, with a melodic, catchy chorus. It really reflects the evolution of the band as a whole. Last Temptation keep it heavy with some stunning meaty riffs, brilliant guitar licks and soaring vocals whilst retaining the melody. Crank this track loudly whilst cruising the highway. Last Temptation are set to light up the metal world.

The first important step has been mastered effortlessly; now Last Temptation are going the whole hog. Following their successful album debut and enthusiastic reviews in countless music rags, shows with bands such as Dream Theater, plus festivals such as Hellfest, the band surrounding guitarist Peter Scheithauer (Killing Machine, Belladonna, Temple of Brutality) and vocalist Butcho Vukovic (Watcha) is all set to embark on the second stage of its career in summer 2021. Last Temptation have signed a new record deal with Crusader Records/Golden Robot Records and are ready to present several new singles between June 2021 and January 2022, followed by their brand-new album Ashes ’N’ Fire in February 2022.

“You can feel that we’ve made a major step forward, both as a live band and as songwriters, all thanks to the shows we’ve played so far.” - Peter Scheithauer

Talking of the new line-up: In bassist Julien Rimaire (Los Dissidentes Del Sucio Motel) and drummer Vince Brisach (Mitch Ryder), along with Scheithauer and Vukovic, the band have a whole new rhythm section supporting them on Ashes ’N’ Fire. While Last Temptation’s self-titled debut still boasted a number of international guests, such as Bob Daisley, Vinny Appice, Stet Howland, James Lomenzo, Don Airey, Steve Unger and Rudy Sarzo, the band now consists exclusively of European musicians. “This step was necessary to make Last Temptation more flexible when it comes to the organizational side,” explains Scheithauer. “The new line-up makes it so much easier to rehearse spontaneously, play gigs at short notice and prepare album productions.”

No doubt about it: Last Temptation have grown into an even tighter unit, musically as well as logistically, and are positively bursting with enthusiasm. The songwriting team consisting of Scheithauer and Vukovic, together coming up with 16 tracks for Ashes ’N’ Fire, eleven of which have made it onto the album. They range from up-tempo numbers such as “Stronger Than Fate” and “Free Strong And Loud” to the Black Sabbath-esque “Going Crazy” and the ballad “In The Mirror”.