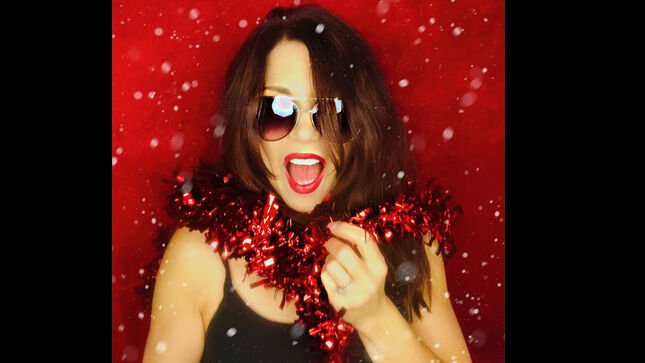 Canadian powerhouse vocalist, Lee Aaron, has had a lengthy and musically adventurous career that spans many kinds of different styles, like rock, jazz, blues, opera, and more.But there’s one project this multi-Juno nominee had considered often, but the timing was never right... a Christmas album.

Lee and her band (Sean Kelly - guitar, Dave Reimer - bass, and John Cody - drums) had tossed around the idea of a Christmas album over the years, but there was always something - tours/recording/life etc. - that kept the project on the backburner. 2020 and COVID-19 brought a new reality.

With their shows around the globe cancelled, there was suddenly an abundance of time. Over the summer, the band began releasing a series of Rockin' From Home videos for fans, which escalated, so when the Christmas idea came up again in mid-September, it was a definite go.

"Each of us had upgraded our home studios, so we thought, Heck yeah!," says Aaron. "We'd always wanted to do this; the only issue was that we should have started sooner! Realistically, we only had about a month to get all the tracks done, but it became a fun mission - and it kept us all from going stir crazy during this downtime! …and the last thing we wanted to create was a rehash of the same old songs so many other folks have already recorded. One or two classics maybe, but if we were going to do this, we wanted to make it really unique and different. It was such a blast putting it all together!"

Almost Christmas contains lovingly curated tunes - from the foot-stomping rock 'n' roll ride of the feature track "It Doesn't Often Snow At Christmas" (Pet Shop Boys) to the classic "Baby Please Come Home" to a sassy version of Louis Armstrong’s "Zat You Santa Claus?" - winding down with the introspective "All I Ever Get For Christmas Is Blue" (Over The Rhine) and an a capella rendition of Joni Mitchell’s timeless "The Fiddle And The Drum". You've never heard Christmas done quite like this.

She also presents a brand new version of her 1991 hit "Peace On Earth", which likewise is as relevant now as it was when it was first released.

Aaron explains: "There's a ton of passion and joy that went into these recordings. The album represented something really positive and hopeful that we could all focus on during this unprecedented downtime. It was a gift that lifted our spirits, and we hope it has the same effect on others."

The album will be available on November 26 via Metalville. Last year, the album could only be ordered via Lee Aaron's own shop and will now be available in stores for the first time with the addition of two new songs.

"Everything's Gonna Be Cool This Christmas"
"Baby Please Come Home"
"Run, Run, Rudolph"
"It Doesn't Often Snow At Christmas"
"Zat You Santa Claus?"
"I Don't Believe In Christmas"
"Merry Christmas Everybody"
"All I Ever Get For Christmas Is Blue"
"Peace On Earth"
"The Fiddle And The Drum"
"Almost Christmas" - new song
"More Fun On The Naughty List" - new song