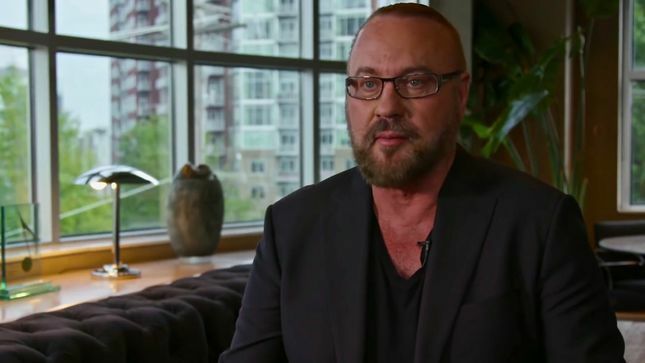 Desmond Child, the incredible songwriter and producer behind dozens of Billboard hits including Bon Jovi's "Livin' On A Prayer", Joan Jett's "I Hate Myself For Loving You", Aerosmith's "Dude Looks Like A Lady", Alice Cooper's "Poison", and many more, guested on Laughing Monkey Music for a career-spanning interview. He looks back on the origins of some of the biggest hit songs, talks coming out and being a producer, reveals "Livin' On A Prayer" was inspired by a cult he was in, working with Ratt on the Detonator album, and says a biography is on the way. Check out the interview below.

Child: "One of the most successful collaborations I had was with Paul Stanley of KISS, and we co-wrote a song called 'I Was Made For Lovin' You'. Motown dance beat and rock guitars; it was revolutionary and changed the course of pop music. It definitely did. It's still to this day KISS' biggest international hit of all time. Paul Stanley used to come to see Desmond Child And Rouge at a place called Trax on the Upper West Side on 72nd Street. Paul would come all the time, and one night he said, 'Hey, why don't you and I try writing a song together?' I said, 'Okay, well, why don't you write a song with me for Desmond Child And Rouge? And I'll write a song with you for your band.' I didn't really know that much about KISS because it was kind of like, 'Oh, that's what little kids with lunchboxes listen to...' or something. But they would play Madison Square Garden. So we made the trade. He co-wrote a song with me called 'The Fight', which we co-wrote with David Landau, and I co-wrote a song with him called 'I Was Made For Lovin' You', and I think it turned out that I did better on the trade."

On coming out and being a producer

Child: "As a producer there was a glass ceiling for me. Bands were okay co-writing with me because there was kind of equality, but the truth is, once you're the producer, you're the big man. You're the boss, and somehow they didn't want a gay guy being their boss. So the truth is that there were no gay record producers out until Linda Perry came along. I was the only one out there for decades, and I knew some dance remixer DJ guys that
were gay, that might have been working with Madonna or something. But for what I did in pop and rock, there was nothing out there, and in that way I've been kind of revolutionary."