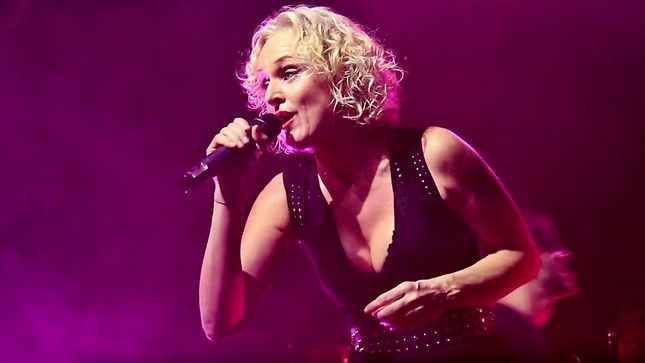 Vocalist Liv Kristine (ex-Leaves' Eyes, ex-Theatre of Tragedy) has posted a new motivational video for the fans, discussing the power of music and the importance of listening to your inner voice.

At the beginning of April, Liv Kristine began offering online vocal training sessions. She has checked in with a shot video update, which is preceeded by her initial announcement that she was making herself available for vocal training.

Liv: "I feel honored to have received requests from people worldwide during recent years, who would like to receive vocal training. Due to your interest, I have been working intensively on a concept which is also a vision from the heart. I’ve been singing intensively and internalized essential processes hereto on a self-didactic basis all my life. It’s a dedication, a true inner call, moreover, based on holistic beliefs. I now feel ready to share my knowledge with you by helping you to localize you inner source, to then, in the next step, strengthen YOUR voice. These sessions will ultimately help you to strengthen not only your singing voice, but also your inner voice, i.e. your true intuitive self to speak and sing out all the passion and emotions inside you. Everybody, no matter age, competence, goals, wherever you are on this planet, are invited to get in touch with me here: management@livkristine.net."

On April 15th, 2016, fans of Leaves’ Eyes were shocked to learn the band had parted ways with vocalist and namesake Liv Kristine Espenæs. In the same breath, the band announced that Finnish singer Elina Siirala of the band EnkElination would take Liv’s place. Given that Leaves’ Eyes had centered around Liv Kristine and her husband / Atrocity frontman Alexander Krull since the band’s inception in 2003 – in the wake of Liv being fired from Theater of Tragedy – it was clear the issues leading to the split were personal as well as professional. It would take some time for the dust to settle, as both sides shared different accounts of what led to the split, but Leaves’ Eyes forged onward with Siirala up front and a significant wave of fan discontent on their tails. For her part, Liv gradually went quiet, making guest appearances on Cradle Of Filth’s “Vengeful Spirit”, Orden Ogan’s “Come With Me To The Other Side” in 2017, and Midnattsol’s album The Aftermath in 2018, but otherwise stayed away from putting out new music. In December 2019, however, she released a new solo single, “Skylight”, which was reminiscent of her Vervain solo record from 2014 and Theatre of Tragedy’s classic third album, Aegis.

“After a few ups and down – a few roller-coaster rides to put it mildly, since I moved to Germany 20 years ago – I decided to start all anew,” Liv says of her comeback. “I practically left everything, cleared all relationships, situations, or ended them. In 2019, I felt the spirit again to continue working on my own music. It was Tommy Olsson (guitarist / ex-Theatre of Tragedy) who reached out in 2016 with a handful of songs that really blew me away. He’s been very patient and supportive throughout my journey, and I have the best composer by my side. I just want to do the music which I love, which I am fully in alignment with. My upcoming solo album is a collaboration with Tommy. It’s in the veins of Vervain, but not at all like it. It is inspired by Tommy’s masterpiece, Aegis.”

Liv has always been a live performer and she makes it clear she will continue to do so as things get back on track. This begs the question as to whether any Leaves’ Eyes material will make it into her set. It’s a painful subject to be sure, but she left behind a legacy of six studio albums that would not exist without her vision.

“My setlist consists of two thirds solo songs, one third Theatre of Tragedy songs,” Liv reveals. “I could play Leaves’ Eyes songs since the band carries my name, but it feels strange, like a loss, which I feel really sorry about. I was thrown out of my own band, period, and that is just not right, especially because I never received any compensation, nor did anybody ask me about name rights. I wish the remaining two members would change the band’s name and do their own thing. None of them ever created a concept and wrote lyrics based on their personal history and birthplace, passion for Norway, and Norse writings. That part was mine, and it was passion, heritage and so much of me in there. The latest brilliant idea the band’s manager had was sending my family a bill of thousands of euros for Christmas. Well, I wish them good luck. Karma is great, by the way. What you give is what will return to you. But, I can’t tell you how endlessly happy I am with what I have today. Everything was and is meant to be.”