LIVING COLOUR Guitarist VERNON REID Talks Breakthrough 1988 Hit "Cult Of Personality" - "When We Wrote It, It Was The Best Day In Our Collective Life" 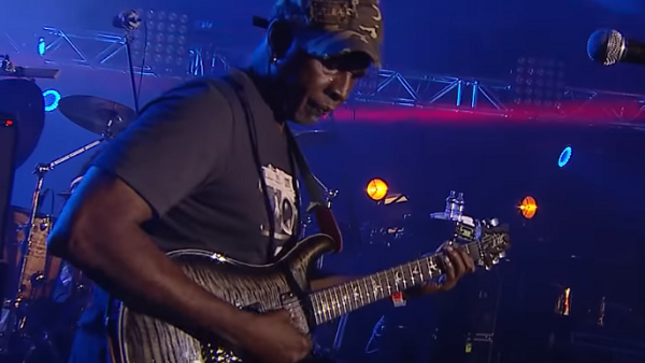 Living Colour guitarist Vernon Reid is featured in a new interview with Guitar Player, discussing the band's 1988 breakthrouigh hit "Cult Of Personality". An excerpt is available below.

Reid: "I love the song for obvious reasons. Sure, it’s our most popular song. What it did for our career is incalculable. And it’s had a lasting impact on the public. The lyric has a catchphrase that, while we didn’t coin it, has become more relevant over the years. But there’s another reason why I love it so much. When we wrote it, it was the best day in our collective life. As a group, we got out of our way and allowed ourselves to create. That’s why it’s special to me."

During mixing sessions, Reid had a sense that the song had hit potential. “Something just told me,” he says. “That’s why I pushed for it to open the album. It grabbed you.” Vivid was a slow builder, and after a first single, “Middle Man,” failed to ignite radio, the label released “Cult of Personality.”

As if flicking a light switch, everything changed: The song reached number nine on Billboard’s Hot 100, and the music video became a heavy-rotation MTV mainstay. Sales for Vivid soon exceeded double Platinum.

Reid: "Nothing can prepare you for that kind of sudden rush of fame. What you had previously imagined about success turns out to be totally different. I didn’t have anything to compare it to. It was like I was having an out-of-body experience."

Through the years, "Cult of Personality" has been a staple of every Living Colour show, and Reid can’t fathom playing a gig without performing it.

"Why would I?" he says. “It’s a great song, and I love playing it." He laughs. "There’s a special place in hell for musicians who have a hit song that they despise, but you won’t find me there."