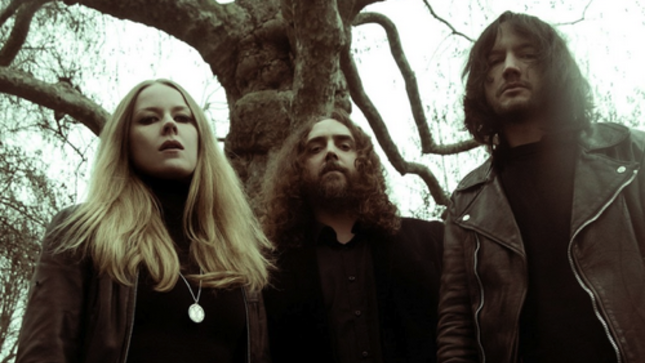 In a new interview with music writer and long time BraveWords supporter Joel Gausten, Lucifer singer Johanna Sadonis discusses a number of topics including moving on with the new band after the sudden demise of her previous outfit The Oath, and Lucifer's primary musical influences. An excerpt from the conversation appears below:

Gausten: Around this time last year, there was obviously a lot of interest and excitement surrounding The Oath. To start with a question I'm sure you hear quite a bit these days, what happened? It seems like that band ended before it even began.

Sadonis: "Yeah, it did, unfortunately. I did have a lot of plans for The Oath, and it was not supposed to end so prematurely. I was actually devastated when it ended. I don't want to go into too much detail, but you could say it was like a fiery love affair, where everything happens very fast and you burn up all the energy very fast. It worked out really well with the songwriting, but personally it didn't work... I thought that instead of becoming all depressed, I'd just take all this energy and channel it into something creative. I sat down and plotted out Lucifer, and that's how this thing came about."

Gausten: Obviously, there are several different styles within the Metal genre. Lucifer, to me, seems to be very much going for that '70s Pentagram, Sabbath, Hammer Films, Doom vibe. What is it about that particular aesthetic and musical direction that appeals to you?

Sadonis: "I've been listening to metal since I was like 13 or so, which is over 20 years. I went through various phases and stages musically in Metal and Hard Rock and so on. The older I got, the more I kind of looked backwards to where everything is coming from and where the roots are – and why the roots are there with bands like Deep Purple, Black Sabbath, Aphrodite’s Child, Lucifer's Friend, Uriah Heep and all that stuff, and why all the metal bands are somehow based on those forefathers. There's a reason for it – because it's so good. I think when you're a musician and a music fan, you realize that you cannot reinvent the wheel in heavy metal and hard rock; there's been a lot done. For me, it's just because I listen to that stuff so much – late '60s, '70s and some '80s stuff...That's mostly what I listen to in the heavy metal and hard rock genre. That's what I'm influenced by, so it's a natural thing to have the music influenced by it. Everybody in the band is listening to this old stuff, because that's where the quality lies."

Lucifer will release their debut Lucifer I on June 16 via Rise Above Records.

There has been a ton of anticipation and excitement behind the band featuring Johanna Sadonis that rose from the ashes of The Oath.  Today another song from the album has been made available for streaming with “Purple Pyramid”.

In support of Lucifer I the band will play their first ever North American tour alongside High on Fire, Pallbearer, and Venomous Maximus.  The tour begins July 30 in San Diego, CA and wraps up August 23 in New Orleans, LA.

Following the premature demise of The Oath, Johanna Sadonis formed Lucifer.  Whilst The Oath was a much-celebrated band, she wasted no time in creating a new beast to go beyond previous limitations.  That beast is Lucifer and this is their stunning debut album titled Lucifer I.

Having released their debut single, "Anubis" earlier in 2015, there has been a significant buzz generating around Lucifer. T

With the addition of Garry Jennings (ex-Cathedral/Death Penalty) as co-songwriter and studio guitarist, Lucifer have moved forward into a realm of rock music which is very rare and very special in this time. Genuine, classic, heavy, studied and passionate are just a few words that instantly spring to mind upon first listen. Lucifer's instinctive take on the very soul of early heavy metal is the electrified essence of rock 'n' roll at its nascent purest.