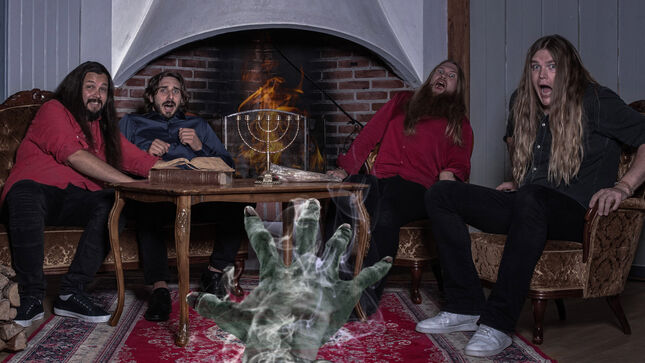 And this year, the band has again prepared a very special surprise for their fans: an extended version of the album, that will not only be available on vinyl, but that will finally complete the story surrounding the grumpy old Ebenezer Scrooge with two previously unreleased songs. A Christmas Carol - Extended Version will be out and getting you into the heavy Christmas spirit on November 12, but the first new single, "Glory Of Christmas" is already available today. It comes with a beautiful art video, drawn by vocalist Tommy Johansson.

Watch the clip for "Glory Of Christmas" below. Get the single digitally here.

The band comment: "When we released A Christmas Carol last year it was a dream come true to finally release a real Christmas album. But it was not available on vinyl, and we felt we had a bit more to give to complete the story. So now we have added two new songs to the story where we get to know more of Scrooge's hate for Christmas and also how scared such a powerful man can get when believing his judgment day is dawning. With these two new songs, we now have A Christmas Carol - Extended Version, which completes the story of Scrooge and his Christmas ghosts. The first single 'Glory of Christmas' is heavier than the previous songs, but the Christmas feeling hasn't gone anywhere and it has one of the strongest choruses on the album. During the upcoming tour in December people will hear the entire album from beginning till the end with the new songs!"

Pre-order A Christmas Carol - Extended Version in the format of your choice here.

See Majestica live on their European tour this winter and experience a unique "power metal meets musical" staging of A Christmas Carol by Charles Dickens. Get your tickets here.