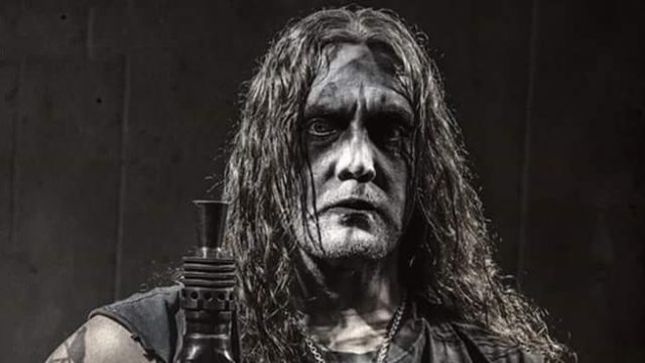 In a new feature by music writer Joel Gausten, Marduk guitarist Morgan "Evil” Steinmeyer Håkansson discusses a host of topics including the band’s ongoing issues with Antifa and his admiration for Misfits / Samhain / Danzig frontman Glenn Danzig. Excerpts from the feature appear below:

Naturally, a band that has built a career out of corpse paint, leather, battle-themed lyrics and savage music draws plenty of attention – and not always the kind that succeeds in selling albums or concert tickets. Back in the ’80s, the enemies of free expression were the obvious suspects: Senators’ wives, Christian evangelicals, television talk show hosts and concerned (if quite misguided) suburban parents. But these days, the greatest calls for censorship come from supposedly left-leaning factions like Antifa, who succeeded in having a Marduk performance in Oakland, CA canceled earlier this year under the premise that the friendly Swede giving this interview was somehow an unabashed white supremacist. In a letter sent to the venue, Oakland police stated that "based on the riot that occurred in Berkeley in regards to Milo Yiannopolous speaking at the university, it is reasonable to believe that there would be a threat to public safety if these groups showed up to protest Marduk."

Ask any touring band (especially one from overseas) what it means to have a show fall through, and you’ll inevitably hear tales of missed merch sales, lost meals and less gas in the tank to make it to the next gig. But instead of giving in to such lunacy and returning home with his tail between his legs, Morgan dismisses the situation with a shrug and a few pointed words towards his band’s newest adversaries.

“The thing is, when it happened in Oakland, it shouldn’t have become this problem. Even the metal community – even if they didn’t want to – were part of making it as big as it became. Everybody wanted to write about it, so they gave [Antifa] more exposure than they deserve. If everybody – local promoters, the metal media – wouldn’t have given a fuck about them, it wouldn’t have been a problem. [Antifa] were happy because that’s the way they work. They want things to become big; when people start talking about it and writing about it, it becomes bigger than it is. It wouldn’t have been a problem; if there had been a problem at the place, we could have sorted it there. It’s ridiculous. People always ask me to comment on it, and what should I say? It’s obvious that these people don’t know shit about anything. It’s not even worth commenting about. The things they’ve said about us as a band… somebody showed it to me, and it’s like. ‘Okay, this just proves that they are fucking retards, so I don’t care.’ If they want to cancel the show, who cares? We’ll survive a canceled show; we’ll still be back. We’ll survive longer than them, for sure.”

One topic that is not up for debate is Morgan’s admiration for both The Misfits and the band’s original (and recently reinstated) frontman, Glenn Danzig. The guitarist’s devotion to the Garden State Horror Punk progenitor extends to his work with the Misfits-flavored act Devils Whorehouse, while Marduk have recorded covers of both The Misfits’ “Earth A.D.” and Samhain’s “Macabre.”

“The Misfits have always been a great inspiration in some ways, especially 'Earth A.D.' for me. It’s power and aggression right in your face. The most preferable era Glenn ever did, for me, was Samhain. That’s meant a lot inspiration-wise to me, but I love all the Danzig stuff because it’s different. Every time I meet him, it’s a personal boost for me because I get an energy kick out of it. He just has this strong personality that I really miss out in a lot of artists today. He has a certain charisma and power, and I’m a fanboy in that way. I feel very glad to have gotten to know him, and I respect him so much. He’s one of those people who’ve always gone in their own direction – doing what he wants to do and never caring about what anybody said... That’s the way it should be.”

Elliott Fullam from Little Punk People hung out with Hakansson backstage at the Gramercy Theatre in NYC for a bit last night at their show and had a discussion about life, death, and fate.

When asked what some of his favourite bands that aren't metal, Morgan surprised us by picking "Consider The Birds" by Christian band Woven Hand as one of his all-time favorites. Morgan also discussed his distrust of government, his love of ESP guitars, and the fact that he has a lot of material already finished for a next record.