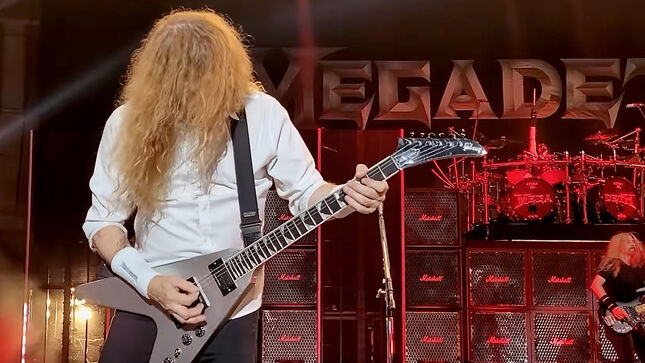 Dave Mustaine has shared a snippet of a new Megadeth song entitled “Life In Hell”. Mustaine shared the snippet in a Cameo video, the video service where users hire celebrities to record brief, personalized video messages.

The Megadeth leader says in the video, “There you go. A little special surprise for you, buddy. So I think that makes you the first person in the outside world; outside of the studio and the band and my family that’s heard any music from the new record.”

Megadeth's new studio album, The Sick, The Dying... And The Dead, has been mastered, and is being delivered to the band's label. Leader Dave Mustaine revealed the news in a new Cameo video for a fan named Louie.

Says Mustaine (see below): "We're super close to having The Sick, The Dying... And The Dead out. We've been mixing and mastering it, and the mastering was done yesterday. So now it's off to the label, and pretty soon it's gonna be in your very talented hands."
In a recent interview with American Songwriter magazine, Mustaine revealed that The Sick, The Dying... And The Dead, will be released in spring 2022.

An excerpt states: Set for release in spring 2022, Mustaine says the title track is about the plague, but not solely centered around the current pandemic. A broad, more historical scope of the diseases that have plagued humankind throughout time, The Sick, The Dying... And The Dead covers the current virus, swine flu, and other epidemics from centuries past."

Further on in the article, it's revealed that throughout its afflictions and other reflections, the album is assembled from riffs and music Mustaine has had archived for years, some as far back as his teens. "A lot of the riffs have been saved over time," says Mustaine. "A brand new song can be made up of something I wrote when I was 15 or 55. If It's a good riff, I'll save it."

Working on the tracks, along with guitarist Kiko Loureiro and drummer Dirk Verbeuren, formerly of Swedish metal band Soilwork, who joined the band full time in 2016, Mustaine say everyone was involved in piecing together the songs on the album recorded partially in the US with Loureiro working on his parts from his home in Finland.

Stay tuned for further details on the new album.