MEGADETH Frontman DAVE MUSTAINE On Three Decades Of Friendship With BODY COUNT's ICE -T - "Listening To The Music He Makes, It's Still Motivational" 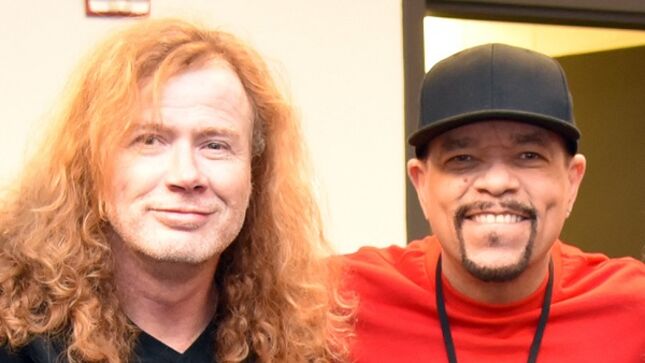 Mustaine: "It's been about 30 years. I like Ice a lot. I really admire what he's done. He's a talented person. The opportunities he was presented with, he made them work for him. He did what a lot of the artists from the cities, deep down in the cities, would do. He talked about the blight and the hardships and how they were going to make it, and that determination is always a great motivator, whether you're white or black. Listening to the music he makes, it's still motivational."

Ice-T: "I was aware of Megadeth, and my attention was brought to Dave Mustaine because there was some magazine that asked his favourite five albums of the year, and he said O.G. (1991's Original Gangster). That was odd, coming from the leader of a heavy metal act. So from that moment, I said, 'I gotta meet this guy.'"

Ice-T makes a guest appearance on the new Megadeth album, The Sick, The Dying… And The Dead!, on the song "Night Stalkers". Mustaine appearaed on the Body Count song "Civil War", taken from the Bloodlust album released in 2017.

On June 23rd, Megadeth revealed the video for "We’ll Be Back", taken from their highly anticipated 16th studio album, The Sick, The Dying… And The Dead! available via UMe on September 2.

Featuring twelve new tracks, The Sick, The Dying… And The Dead! will be released on CD, vinyl, and cassette, as well as digitally through all online partners and can be pre-ordered/pre-saved here. There will also be a limited deluxe edition 2LP, 12-track album pressed on 180g black vinyl, housed in a numbered gatefold jacket with a 12x24 lyrics/credits insert, a lenticular vinyl lithograph and a bonus 7" featuring "We’ll Be Back" and the unreleased b-side "The Conjuring" (Live).'The limited deluxe edition can only be purchased via Megadeth’s official online store, Sound Of Vinyl, and uDiscover.

"The Sick, The Dying… And The Dead!"
"Life In Hell"
"Night Stalkers" (feat. Ice T)
"Dogs Of Chernobyl"
"Sacrifice"
"Junkie"
"Psychopathy"
"Killing Time"
"Soldier On!"
"Célebutante"
"Mission To Mars"
"We’ll Be Back"