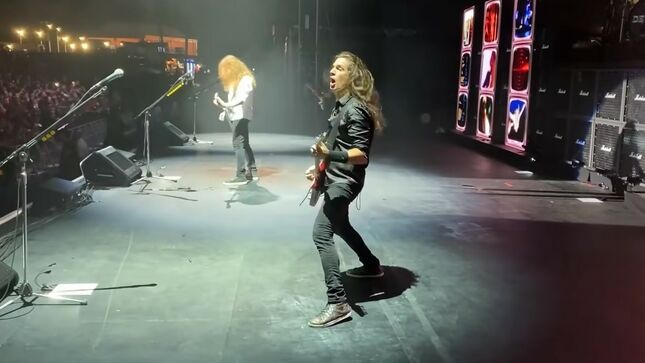 Megadeth guitarist Kiko Loureiro has shared a new video taking fans backstage in Phoenix and Los Angeles while on The Metal Tour Of The Year with Lamb Of God and Hatebreed.

Says Kiko: “In this video you will see the Phoenix backstage and soundcheck before going on stage. As I walked around the whole house, Lamb Of God was on stage and I went there take a look before getting ready to go on stage. After that, straight to the next city, Los Angeles.

“Fivepoint Amphitheatre, that's where we played. Showing the whole place with a drone, you can check closely teams preparing all the equipment for the night's shows. During this preparation time there was an epic table tennis kombat with James Lomenzo (Megadeth bassist). Who was the champion?! Watch to see!”

Loureiro recently released the new video below following the load-in for the Metal Tour Of The Year with Lamb Of God and Hatebreed.

The final three shows of Megadeth and Lamb Of God's Metal Tour Of The Year were postponed to spring 2022.

Said Megadeth: "The final three shows of the Metal Tour of the Year in Toronto, Laval and Quebec City will unfortunately be postponed to Spring 2022 due to restrictions in the Quebec province and international logistical issues. Please hold onto your tickets as they will be valid for the new dates as soon as they are announced."