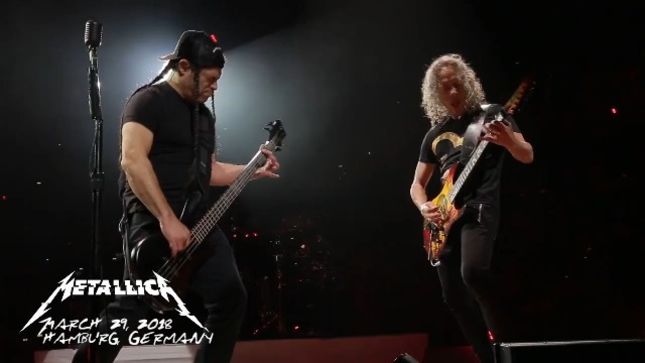 During Metallica's March 29th show in Hamburg, Germany, bassist Robert Trujillo and guitarist Kirk Hammett paid tribute to Michael Schenker with a cover of MSG's "Into The Arena" followed by a tip of the hat to UFO with "Rock Bottom". Check out the preformance below.

According to Billboard, Metallica’s Hardwired… To Self-Destruct roared back into the US charts with 65,000 units (up 413 percent), of which 63,000 were in traditional album sales (up 480 percent). The former No. 1 set zooms back up the list following sales generated from a concert ticket/album sale redemption offer for the next U.S./Canadian leg of the band’s WorldWired Tour. 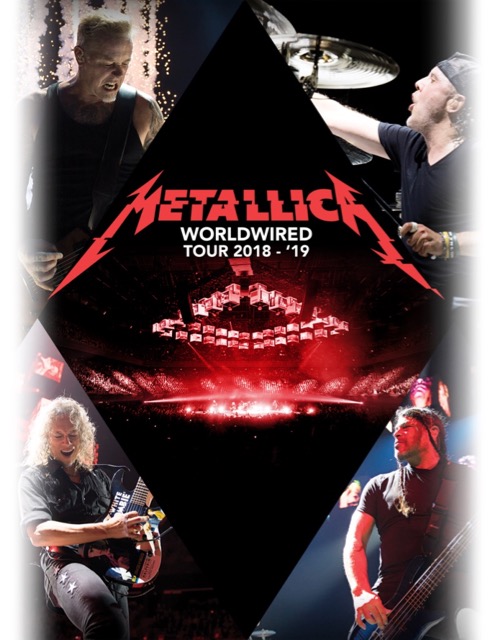 A recent band tour update says: "The fall/winter tour will mark a few firsts for us as each show will get rolling with the Light It Up pre-show party hosted by our very good friend Jim Breuer. Jim, along with a DJ to get the night rocking with some great tunes, hits the stage before us with comedy, fan interaction, giveaways and much more. And if you love to travel and one show just isn't enough, then perhaps the Wherever I May Roam Black Ticket is for you! For the first time in 'Tallica history, you may purchase one ticket that will allow you floor access to any Metallica show on the 2018/2019 North American tour. Feel like trucking to Tulsa? Booking to Boise? Motoring to Minneapolis? No problem... you pick the show, call us no less than 48 hours before the gig and you're in! A limited number of 250 of these Black Tickets* will be available for $598 (yes… we are celebrating the re-issue of the Garage Days Re-Revisited EP!). All sale dates and times below.

"Of course, some things don't change! As we have been doing for most of the WorldWired shows, every ticket purchased includes your choice of a standard physical or standard digital copy of Hardwired…To Self-Destruct. Keep it for yourself or gift it to a friend or family member... you'll receive info via e-mail after your ticket purchase on how to obtain your copy.** The enhanced experience options designed to take your Metalli-night to the next level are also returning as we continue to partner with the team that makes it all happen at CID Entertainment. You'll have three options of special enhanced experiences, including premium tickets and amenities ranging from early access to the venue and the "Memory Remains" exhibit of memorabilia to meeting some of us(!). Visit CID Entertainment for full package details.

"Finally, we'll continue to raise funds for our All Within My Hands foundation, which supports a cross-section of national, local and Bay Area charities, music education programs and local food banks. Continuing our collaboration with Crowdrise, we encourage you to make a donation when purchasing tickets to the upcoming shows and each time you donate, you'll be entered to win tickets, pre-show party passes, meet and greet passes, and one lucky winner will be flown to the last show on the tour. For more information, visit crowdrise.com/Metallica2018.

"We're having an absolute blast indoors in Europe, so why not extend the fun?!? We'll see you back in North America this fall!"

Check out a tour announcement video below.

* Wherever I May Roam Black Tickets are non-transferable and if re-sold will be revoked. Each ticket is good for entry to Metallica specific shows and may not be used for festivals, promotional shows, benefit concerts or any other dates not included in the 34 city North American tour announced on February 26th, 2018. Use of a Black Ticket will require a reservation for each show you plan to attend no less than 48 hours in advance. More details about how to use your Black Ticket will be sent to purchasers via e-mail.

** Every ticket purchased through official outlets includes your choice of a standard physical or standard digital copy of Hardwired…To Self-Destruct. Fans should expect to receive information from Warner Music Artist Services on how to redeem their albums within 21 business days after their purchase. Full details of how you can gift the album, should you have already purchased, will be given on the redemption page. 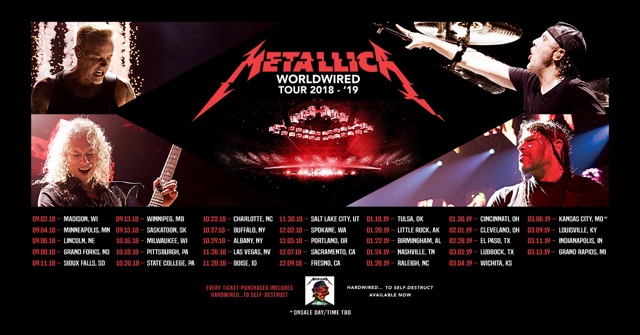