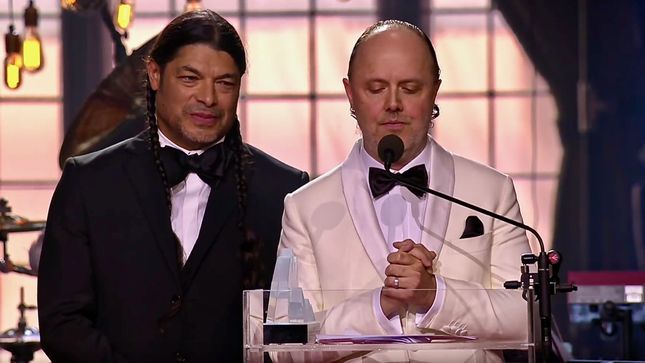 After receiving the Polar Music Prize from King Carl XVI Gustaf of Sweden in Stockholm on Thursday (June 14th), Metallica has donated its monetary award of one million Swedish Kroner (just over $130,000) to three charities, reports Billboard.

The band is giving 50 percent of their prize money to the Stockholm City Mission, which supports the homeless; 25 percent to the World Childhood Foundation, founded by Sweden’s Queen Silvia; and 25 percent to the Afghanistan National Institute of Music, also a recipient of this year’s Polar Music Prize. Metallica was one of this year’s Laureates, along with Dr. Ahmad Sarmast and ANIM, the music school he founded in 2010 in response to that country’s civil war and destruction of centuries of rich musical tradition.

Read more at Billboard, and watch video of the presentation below:

Ghost joined Candlemass to honour Metallica by performing "Enter Sandman" at the ceremony. Watch the performance below: