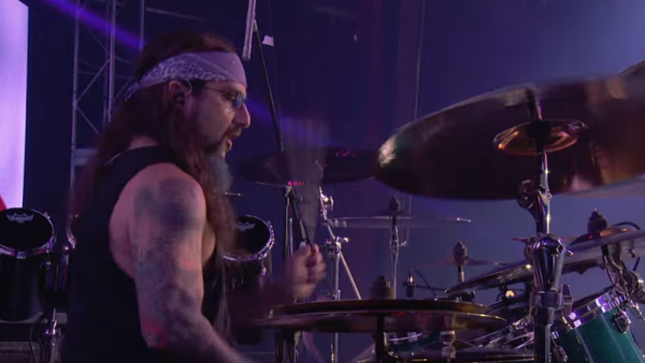 Portnoy: "I remember getting the call that morning as well from the Adrenaline Mob guys because they reached out to let me know what had happened. And I saw them play with A.J. only a few days or maybe a week or two before that happened, and anyway, it was shocking for me already being on the inside with those guys.

I can't imagine what it's like for a band member... and for those guys, they played the next night, so they asked me to come out and play with them. They had a gig at Starland the night after A.J. passed away, the following day, and they wanted to continue on and play, and they asked if I could play some of the show that night, and of course I said yes, I wanted to do whatever I could to help.

That was the night that Jay Jay and I started talking about hooking up - if you guys needed somebody; he mentioned it, and he said, 'You guys have stuff scheduled?' And I was like 'Well, you let me know, I'm here if you need me,' and it was that night, I was on stage playing A.J.'s drums that night, they even used his kit at that particular show, so it was surreal, and then to be sitting in the RV the next day - it was really surreal."

On March 20th, 2015, Adrenaline Mob's band members attempted but failed to wake A.J. Pero on their tour bus. The band was traveling from Baltimore to Poughkeepsie. Pero was taken to a hospital where he was declared dead from an apparent heart attack. In 2017, the band released their third studio album, We The People, containing Pero's last recording: a cover of Billy Idol's "Rebel Yell".