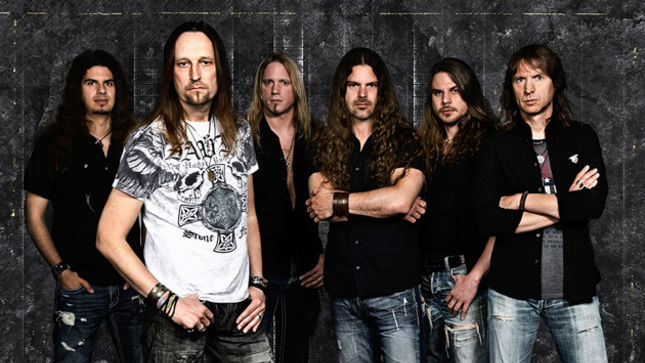 Mob Rules’ 20th anniversary boxed set, Timekeeper, will be out on October 13th within Europe, in Germany on October 10th, and in North America on October 28th.

"My Kingdom Come" was released in September as a digital single including bonus track worldwide. A limited physical version of the single is also available. A snippet of the single can be heard below:

To get in the mood for the launch of Timekeeper, see the new trailer below:

While Mob Rules are currently taking a deep breath before preparing for their anniversary shows, the work on their ambitioned 20th anniversary boxed set, Timekeeper, was recently completed. The musicians are revealing bit by bit exciting details about the box.

“Following an elaborate production, which was done in real team work, the result makes us both happy and proud,” comments keyboardist Jan Christian Halfbrodt. “Over the last twenty years, Mob Rules have accumulated lots of material and of course lots of ideas which we wanted to integrate into this boxed anniversary set, so at the end of the day it has turned into a 4-disc package including DVD. As a fan item, we feel it’s an absolute must!”


The band have already given away that a number of renowned guests have contributed to Timekeeper, among them Udo Dirkschneider (U.D.O.), Amanda Somerville and Sascha Paeth (both Avantasia), Peavy Wagner (Rage), Michael Ehré (Gamma Ray), Herman Frank (Accept) and Bernhard Weiss, and the result of Mob Rules’ successful cooperation with the Axxis frontman can now be heard on a pre-release snippet.

“With his musical biography, Bernhard is one of our role models, and we’re really excited about his vocal contribution on "Celebration Day",” Halfbrodt explains, thrilled at the great number of pre-orders for the limited box, which is numbered individually and by hand.

You can listen to the snippet below:

The band have revealed initial details about this special package which consists of two CDs, a single and a live DVD.

CD1 has Mob present the 15 most important songs from their previous eight releases, among them classics such as "Black Rain", "Hollowed Be Thy Name", "Astral Hand", "Rain Song" (Live) and "Cannibal Nation".

These artists can be heard on newly recorded Mob Rules classics, the cover versions "Lights Out" (UFO) and "Run With The Wolf" (Rainbow) as well as two brand-new songs which Mob Rules composed exclusively for Timekeeper.

“This boxed set reflects the band’s past, present and future,” comments Nikolas Fritz.

Timekeeper is rounded off by a DVD featuring recordings from the 2011 Mob Rules performance at the Prog Power US festival in Atlanta/USA plus extensive bonus material.

Nikolas Fritz: “Our fans kept asking about those film recordings, that’s why we have now had the material cut and its sound mixed. A great souvenir, also for ourselves.”

Real eye-catchers are the cover artwork and 44-page booklet which are part of the elaborate box, featuring scores of photos from all phases of Mob Rules’ 20-year career, a special feature being the fact that each one of the limited boxes has been numbered individually by hand, making this boxed set a very special fan item.

"All Above The Atmosphere" (new recording, with Herbie Langhans & Herman Frank)

"How The Gypsy Was Born" (remastered, with Peavy Wagner)

"Run With The Wolf" (new recording, with Sascha Paeth)

"Meet You In Heaven" (Live at Pumpwerk, Wilhelmshaven, 2004, prev. unreleased)

"The Glance Of Fame" (unofficial Clip)