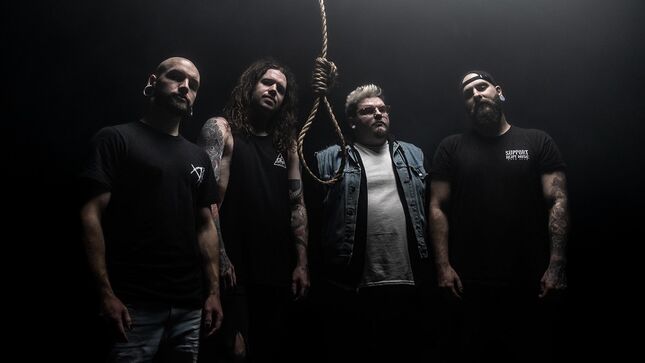 Montreal’s Dead Velvet has a second single coming out, following on the heels of their well-received debut single “The Dogs”. This new single “Lonely Wreck” and its music video is streaming below.

According to the band, “Lonely Wreck” is more or less a song about being the last man standing at a party, and also the impact that the abuse of drugs and alcohol can have on an individual. Although the words may seem to glorify this lifestyle, they were more intended to shine a light on the contrast between the highest highs and lowest lows, because they tend to go hand in hand. It’s a kind of dirty homage to mental health. The band continues to explain the musical aspects behind the track:

“We want to write music that gets people’s blood pumping and we think we accomplished that with ‘Lonely Wreck’. The eerie sound hovering over the instruments throughout most of the track sets the mood right from the get-go. There’s a lot of motion and dynamic throughout the song, whether it’s from the creepy whispering and funky bass throughout the verses, the upbeat energy of the choruses, or the haunting sounds during the intro and outro. The song is definitely a trip.”

Dead Velvet has recurring themes throughout their songs, kind of like a set of ingredients that they use to cook their tracks with. As for the music video, death is once again a big part of the imagery, but instead of them being murdered, this time they focused on an individual struggling with addiction and the depression that comes with it who, eventually, loses control of his life and contemplates suicide.

Since the release of their debut, Dead Velvet has been getting a lot more hype than they anticipated. They have played a couple of shows, to wild crowds giving them solid encouragement to keep going strong. Listeners have grown fond of them, and the band can’t wait to release this new song to give them another taste.

They are recommended for fans of Deftones, Stray From The Path, and Korn.