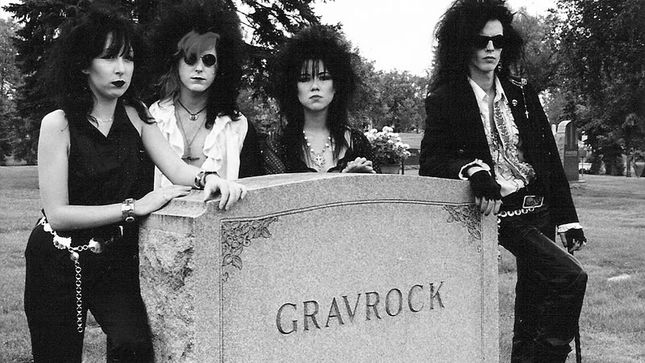 In time for Halloween, Heaven And Hell Records has resurrected the Morticia catalogue.

Morticia came to life in 1985. The band was conceived by founder keyboards/vocalist Jodie Tanaka and drummer/vocalist Matt Bachelor. The duo would set out to create dark, moody and romantic music combined with their sense of camp and tongue-in-cheek humour. The band would be the premier goth/deathrock band in the Twin Cities and be able to walk the realms of punk, alternative and heavy metal being, embraced by a variety of scenes. Sharing the stage with local heavy metal heroes such as Impaler and Slave Raider, opening for punk icons like Wendy O Williams or sharing bills with deathrock giants as Alien Sex Fiend and Sex Gang Children, Morticia proved they could hold their own in any arena.

The two would recruit bassist Chrystopher Winter to create a solid trio foundation that would last throughout most of the band’s existence. Along with the addition of guitarist Therese Rita Langevin, the first line-up of Morticia would record and self-release a 5-song EP containing covers of The Doors “Crystal Ship” and Lou Reed’s “Walk On The Wildside”. The humble release would prove to be a small sample of what was yet to come. In 1986, Morticia would record a 2-song 7” single with the song “Zombie Love” and “Scare Me To Death”.

In the wake of the departure of Langevin, Morticia would recruit new guitarist Carmilla Casquette and the following year would release their full-length debut Mortal Fear with guest musicians Ross Willmert, and Brian Bart from the melodic metal band Dare Force, providing additional guitar. Additional backing vocals provided by Betsy McComber. Recorded at Logic Studios in Minneapolis and produced by Bart, Tanaka, Batchelor and engineered by Bart. Released by Channel 83 Records on both vinyl and cassette, the 9-song album would come to life as a monster of deathrock that evoked the spirits of the genre’s heavyweights such as 45 Grave, Skeletal Family and Christian Death.

In 1988, Morticia would release their follow-up LP D.O.A, with the title track an unlikely cover of ‘70 psychedelic/progressive rock band Bloodrock. The cover-song choice would be a testament to the various influences in the band that would contribute to their unique brand of Goth and deathrock.

The 8-song album released on Channel 83 Records on vinyl would see the band's sound evolving even further branching into several directions creating their style and approach to the deathrock subgenre. To accompany the progressively theatrical sound and direction Morticia would begin to focus more than ever before on the visual aspect of the band’s performance by using props and parlour tricks to enhance the experience of their live shows.

A line-up change would occur once again seeing the departure of bassist Winter. With only the original founding duo of Tanaka and Bachelor remaining, bassist Timm Farrlor and guitarists Marko Nostrada and Dave Majerus, and later, Tim Kletti would join the band.

In 1991, Morticia would release their final album to date, 13 Nightmares. Released on Channel 83 Records on both CD and cassette containing 13-tracks, one of which a cover of “Bela Lugosi's Dead” by gothic rock legends Bauhaus. The album would show the band bringing in more commercial heavy metal influence while holding on to the dark Goth aesthetic that the band had created that would only add to the band’s distinct identity of one of the most interesting bands of the scene.

In the sub-genres of deathrock, Goth rock, horror rock or whatever one chooses to refer to it as there has never been a band like Morticia. As difficult as it is to imagine influences of deathrock, Goth, glam, heavy metal, psychedelic, prog with some campy poppiness can all be found within. This is Morticia, there is only one.

Scheduled for release on Hallow’s Eve (October 30) Heaven And Hell Records will be releasing all three Morticia albums, each remastered. These will be limited to 500 copies each.