MÖTLEY CRÜE Bassist NIKKI SIXX - "JOHN 5 Walks Into Rehearsal And We Just Rip The Set From Top To Bottom Seamlessly..." 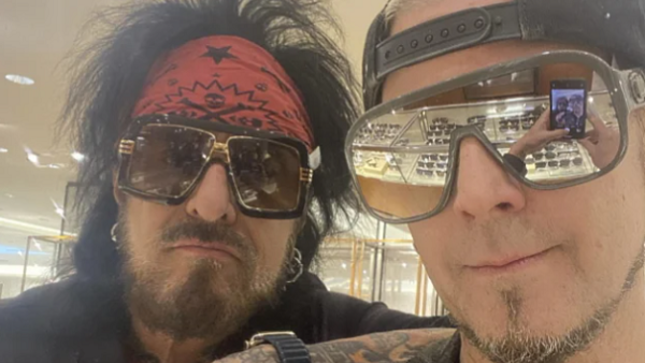 On January 23rd, Mötley Crüe held its first rehearsal with guitarist John 5, who is taking over for Mick Mars for touring purposes. Bassist Nikki Sixx took to social media before and afterwards, praising John 5.

Well that was fucking epic. @john5guitarist walks into rehearsal and we just rip the set from top to bottom seamlessly. 🤘🏽 That took 90 minute’s and then the next few hours we just laughed and told dumb rockstar war stories. @MotleyCrue DAY 1

Mötley Crüe recently issued the following statement in regards to the announcement that  guitarist Mick Mars will no longer tour with the band, but will continue as a member.

"While change is never easy, we accept Mick's decision to retire from the band due to the challenges with his health. We have watched Mick manage his Ankylosing Spondylitis for decades and he has always managed it with utmost courage and grace.

To say "enough is enough" is the ultimate act of courage. Mick's sound helped define Mötley Crüe from the minute he plugged in his guitar at our very first rehearsal together. The rest, as they say, is history. We'll continue to honor his musical legacy.

We will carry out Mick's wish and continue to tour the world as planned in 2023. No doubt will it take an absolutely outstanding musician to fill Mick's shoes so we are grateful that our good friend, John 5 has agreed to come on board and join us moving forward. We'll see all you Crüeheads out on the road!" - Vince, Tommy & Nikki

Says John 5 - "I'm honored to carry on Mick's legacy and am looking forward to playing these songs.”

Hot off the heels of the biggest North American stadium tour of 2022 with more than 1.3 million tickets sold, the world’s most iconic and celebrated rock legends Def Leppard and Mötley Crüe are going global in 2023 with their co-headlining "The World Tour".

Produced by Live Nation, the world tour kicks off on Saturday, February 18, 2023 at Foro Sol in Mexico City. Both bands will bring their electrifying stage shows across the globe with stops throughout Latin America before heading to Europe in May 2023 - which includes a stop at the iconic Wembley Stadium on Saturday, July 1, 2023 - then wrapping up in Glasgow, UK at Hampden Park on July 6, 2023. Stay tuned for additional 2023 shows to be announced soon.

“After finally getting back on the road and having a monumental summer tour in the US & Canada this year, we’re beyond thrilled to be bringing this massive stadium tour to major cities all over the world, and kicking off Europe in Sheffield where it all started for us 45 years ago. We’re looking to forward to seeing you out there, somewhere soon!” said Joe Elliott of Def Leppard.

“We had an incredible time playing The Stadium Tour in North America this summer and we truly can’t wait to take the show around the globe with The WORLD Tour in 2023. Crüeheads in Latin America and Europe: Get ready! We’re coming for you next and can’t wait to finally see all of you out there again next year!” Mötley Crüe said in a joint statement. 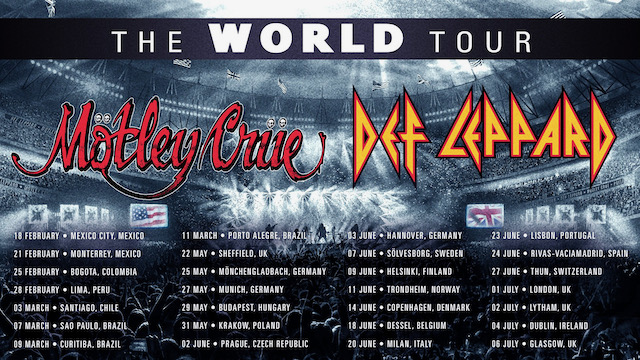