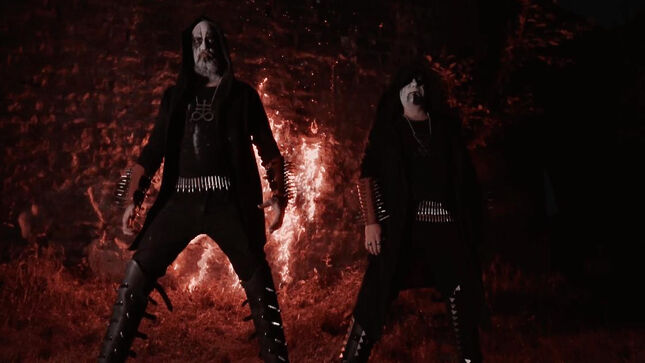 Reunited German black/death metallers, Mystic Circle, recently announced their signing to Atomic Fire Records. Today, the duo unveils a video for "Belial Is My Name", from their eponymous comeback, set for release on February 4.

Beelzebub states: "Kicking off by reviving, more specifically continuing, the outro of our 1999 album Infernal Satanic Verses, we're conjuring hellish demon Belial who's rising up to mesmerize the universe. He - who even calls himself Satan - is one out of four arch demons, chained in hell and causing the downfall of earth - fittingly set to music in the most brutal and bombastic but still melodic way."

Following the musical path where Infernal Satanic Verses - the final Mystic Circle record featuring both reunion members - had left off in 1999, Mystic Circle was produced by the band and Nils Lesser at Vaultroom Productions while its artwork was designed by Brazilian artist Rafael Tavares.

"Letters From The Devil" video:

With seven studio albums and many tours alongside black metal heavyweights Marduk, Gorgoroth, and Dimmu Borgir under their belt, it wasn't just a little history that German black/death metal legends Mystic Circle left behind when they decided to call it quits in 2007. But alas, 14 years of silence are over as Mystic Circle - consisting of Beelzebub and A. Blackwar who had actually left the group in 1999 - have risen from their graves to renew their deal with the Dark Lord.