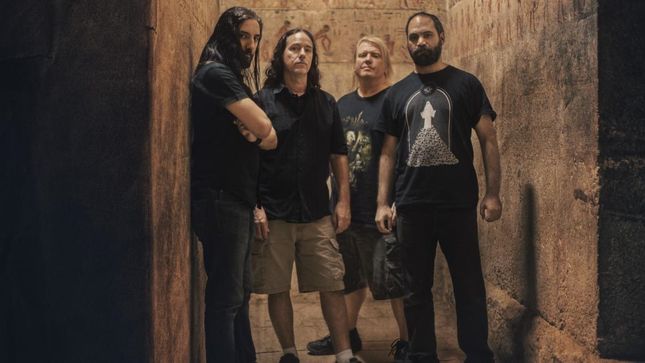 Renowned Egyptian-American artist, director, and death metal musician Nader Sadek has undraped the official video for "The Serapeum: Polluted Waters." The track - which features vocals recorded inside the pyramid of Snefru in Dahshur, Egypt -- comes by way of the Sadek's The Serapeum EP, set for release November 20.

The Serapeum features principal members Karl Sanders (Nile), Derek Roddy (Serpents Rise), and Mahumud Gecekusu (Perversion), who visited Egypt in 2017 at the invitation of Sadek and Cairometal.net, alongside a host of equally notable guests. Marking Sanders' and Roddy's first ever visit to the ancient land, the EP is named after an ancient Egyptian subterranean burial chamber and reflects the collective's deep inspiration by the grounds explored.

"The Serapeum: Polluted Waters" features Sanders' signature tone on rhythm guitar yet offers a different angle of experimentation from the savage death metal for which Sadek is notorious with the inclusion of eastern harmonies and drones provided by Alex Zubair (Nephelium), and instead of chants, Nancy Mounir, among Egypt's top musical talents, adds the ever haunting theremin to the mix. Dominic "Forest" Lapointe (Augury) plays the low end, and Gecukusu swaps solo spots with Sanders on this version. It's all punctuated by Roddy's staggering drum work along with Sadek's ferocious vocal delivery and his first ever in-studio vocal recording. To complete this musical encounter with the archaeological wonders of Egypt, Sadek recorded the vocals inside the inner chamber of Dahshur's "Red Pyramid."

Comments Sadek, "Every time I think about this project, I literally have to pinch myself. Layers and layers of seeming impossibilities and events only dared conjured by dreams, have manifested themselves into physical reality. Bringing Karl and Derek to Egypt for this project, not to mention Dominic, Shaun [LaCanne of Putride Pile], Ben [Clause of Gorod], Morean [Dark Fortress, Alkaloid], [engineer] Mendel [Bij De Leij], having been brought here via the live shows in Egypt I organized, and of course uniting with my brothers and sister Mahmud, Ahdy [Khairat], Alex, and Nancy, is a miracle in itself. I also managed to sneak audio equipment into the pyramid of Snefru, one of the greatest and first pyramids, and recorded my vocals for  an entire song for the very first time there, due to its intentional sound frequency manipulating properties. Drawing inspiration from The Serapeum, whose realization is a far greater mystery than the building of the pyramids, was a testament to the fact that nothing is impossible. Things had a very strange way of aligning themselves."

"I'm really happy to see the release of The Serapeum," notes Sanders. "Nader is an incredible unique visionary multimedia artist and I'm honored and thankful to have had the chance to participate in a project with him. I had such a blast working with Nader, Derek, and Mahmud -- making music with these killer guys was so easy and fun it was like being on vacation. This project was especially memorable for me, as it was my first ever trip to Egypt. It's something I had been yearning to do for a lifetime - to experience firsthand the Epic Grandeur of The Ancients."

"Travel to Egypt, see some killer sights, eat some great food, and write awesome music with Karl, Mahmud and Nader?," adds Roddy, "Sign me up! Great fun and a stellar time."