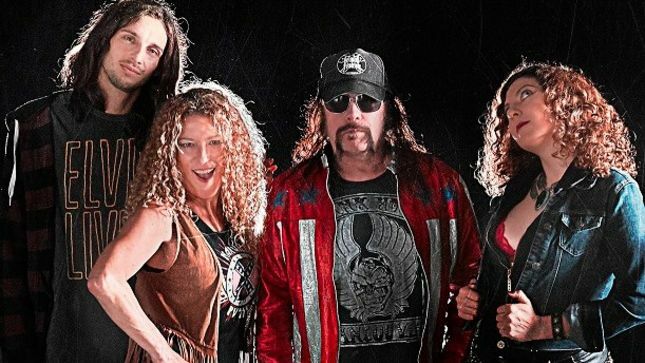 Greg Prato caught up with Nashville Pussy lead guitarist Ruyter Suys – one half of the band's guitar duo alongside husband Blaine Cartwright – for Guitar World ahead of the release of the band's new live album, Eaten Alive. Suys talks gear, their approach to recording and what the future holds for the band. Following is an excerpt from the chat.

GW: The album starts with a kick-ass cover of AC/DC’s "Kicked In The Teeth".

Suys: "That’s been part of our repertoire for a long, long time. It’s such a perfectly executed, dramatic song. I like using it almost as a template for how you want the dynamics of a song to be. It’s just got so much bombast. To come out of the gate with that, it really sets the tone for the show for the night."

GW: What are some of the most fun songs to play live?

Suys: "These days, I really like ''Til the Meat Falls Off The Bone'. It’s kind of funky – it’s got a little Zeppelin meets ZZ Top in it. That gets people really rocking. 'Go Motherfucker Go' is just always completely insane – I go fully ‘Iggy Pop’ in that song, that’s like… the end of the night (laughs). I’m fairly sure you can hear me ripping my strings off one by one on this recording."

Coming hot off of their seventh studio album, Pleased To Eat You, Nashville Pussy returns with Eaten Alive, a ferocious hellride of a live album that is proof positive that the band is one of the best live acts ever. Recorded in the UK, this is Nashville Pussy's Live At Leeds and one of most unrelenting concert albums since Motörhead's No Sleep Til Hammersmith.

Eaten Alive will be unleashed to the world on Slinging Pig Records, the band's very own record label. "This is the album that our fans have drunkenly demanded for years," says singer / guitarist Blaine Cartwright. "'Make an album that sounds like you guys do live!' I've heard that phrase slurred in my face in accents from all over the world," jokes Blaine. "So here it is you drunken bastards!"

The mesmerizing leads of legendary guitarist Ruyter Suys leap off the grooves and grab the listener by the throat. Ruyter has been hailed with accolades since the band's inception including being named "one of the top female performers of all time" by That Metal Show. And that's just one example. Combine that with the irresistible thunderous rhythm section of bassist Bonnie Buitrago and hard hitting drummer Ben Thomas, and it makes for one of the most satisfying rock experiences ever recorded.

Eaten Alive not only serves as a perfect souvenir for hundreds of thousands of lucky rock n' rollers that have seen Nashville Pussy in the 40 plus countries over past 25 years, it's also an excellent starting point for all those unfortunately yet to have been exposed to the fiery baptism of hard rock that the band delivers on a nightly basis.

The band is unstoppable. This album is proof. Order your copy on CD, or double-gatefold vinyl now at this location.