NERGAL Talks Working With BLAZE BAYLEY On ME AND THAT MAN's "All Hope Has Gone" - "Real, Emotional Blues; He's Singing About His Wife Passing" 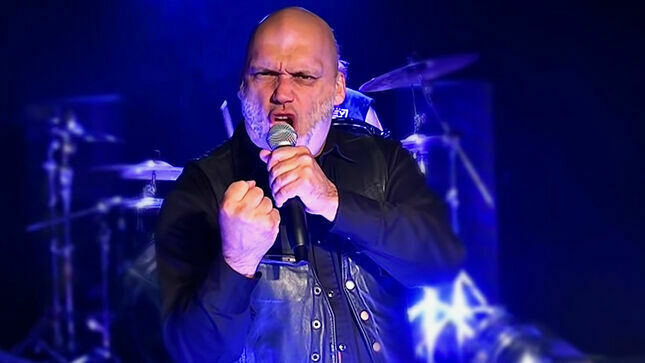 During a conversation with Ultimate Guitar's David Slavković, Behemoth leader Adam "Nergal" Darski talked about former Iron Maiden singer Blaze Bayley, who is one of the guests on New Man, New Songs, Same Shit: Vol. 2, the new album from Nergal's project Me & That Man.

Asked what it was like to collaborate on "All Hope Has Gone" with Bayley, Exodus guitarist Gary Holt, and Venom's founding guitarist Jeff "Mantas" Dunn, Darski replied:

"Well, I'd say it's a trio. Because it's Iron Maiden - or ex-Iron Maiden - Slayer, and Venom. I mean, what is missing here is maybe Metallica (laughs). You know what I mean? This is the top-notch, the peak of the mountain, you know. It's just beautiful. It feels great. I feel very honored to be even able to combine those amazing, iconic figures on the record, and on one song. It makes - it really makes my life, and one of my fan-boy dreams completed.

I love the song, obviously. It's a bluesy ballad in a very Gary Moore kind of way - even though I'm not a big Gary Moore fan - but it kinda sounds like that. Blaze Bayley singing the story of his life - if you're not aware, he's really singing about his wife passing, so it only makes this song - and the title, it says it all, man. There's no faking that. You've got like real, emotional blues, with an, I think, very underrated singer. Because if you ask me, I do dig both Bayley Maiden records, I do like them, and I do listen to them. So I'm not just saying that now. So, of course, Paul Di'Anno - yes; Blaze Bayley - yes; and, of course, Bruce Dickinson is the Iron Maiden voice. But I really do respect and appreciate those two records. And he does just an amazing job because you can really feel that he's just putting so much emotion into his singing. And then, I'm very thankful for both."

You can pre-order or pre-save here.

"Under the Spell" video:

"Got Your Tongue" video:

Me And That Man are: