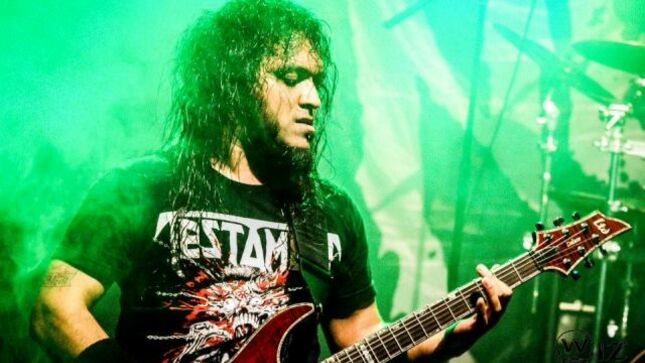 Barney Ribeiro, guitarist for Dubai-based extreme metallers Nervecell, has checked in with the following update:

"Hey everyone, it’s been a minute… I’ve been low-key and off all social media for quite some time. The truth is, I needed that! For now, one of my main priorities is writing new music for the next Nervecell album. Here’s a little teaser of what I’ve been working on."

Back in January, Ribeiro revealed that the original members of Nervecell had parted ways, and that he was forging ahead with the band. Following is his statement on the split.

"As some of you may know or have noticed, things have been rather quiet in the Nervecell camp lately. Without going into much detail, let me begin by making it official that Rajeh (James) Khazaal and Rami Mustafa are no longer in Nervecell. After 20 years of being together and touring the world, we have been through all the possible highs and lows, success, stress, compromises and achievements that come with being in a full-time band. More than anything else though, together we experienced what having dreams come true felt like. And those are the memories that will never go away. I will always be grateful for the contributions both members made during their time in the band and wish them both the best in their future endeavors.

I’ve learnt that with time people change, their priorities change and inevitably their personalities also start to alter. I’ll be lying if I said I didn’t change in the way I approach being in a band today, as opposed to when I started the band in 2000. But for what it’s worth mentioning, I will go on record and say this only because I believe YOU the fans deserve the right to know. There really weren’t any musical or personal differences amongst us. But based on my conversations with both members individually, after asking all the tuff questions and initiating the way forward going into the New Year 2022, it became very evident that I was the only one fighting for this cause.

My priorities have always been of the highest order when it comes to Nervecell. I know the struggle involved, and I’ve never taken a second of it for granted. More importantly, I know why I’m still here doing it - purely for the love of it! I’m still that same kid with that same desire and fire that burns inside. So rest assured, I have every intention to continue on with Nervecell. I humbly ask for your patience, as I start to access the challenges that lay ahead, including finding the right replacements to fill in these shoes. Fortunately, I have a select few friends / musicians within my immediate network, who I’ve consulted with and who have been super supportive towards me as I take on this next chapter.

This is definitely not the last you will hear from me / Nervecell."