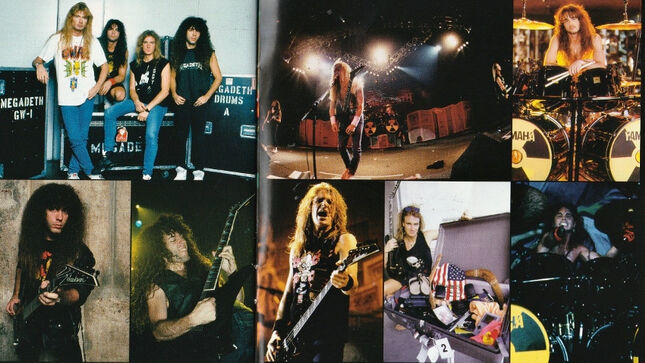 Available for streaming below is the "Nick Menza Memorial Remembrance Reel" created by one of Nick's best friends, Juan Alvarez, who was also Megadeth’s videographer for a few years.

The reel features music from Nick's solo album, Menza - Life After Deth. Taking from Nick's book, MegaLife, Juan Alvarez (high school friend): "I was out on tour as Megadeth’s videographer for a couple of years; a gig Nick got me. I’ll never forget going to Brazil for the first time. Our first night, we got one of the handlers to take us out, and we lit that town on fire, bar hopping and clubbing all night long. It was a blur. The next day we were completely exhausted. We were backstage before the show, and Mustaine comes in and is really pissed off at Nick. He unfolds this newspaper he’s carrying, and there’s this picture of Nick and me and the headline, “Megadeth Has Landed!” Mustaine was so pissed that it was Nick in the paper and not him. It was hilarious, that’s the kind of shit we got into. There was a lot of chemistry between us. If he wasn’t making music or sculpting or painting, Nick was getting into trouble just the right amount to keep it interesting!"