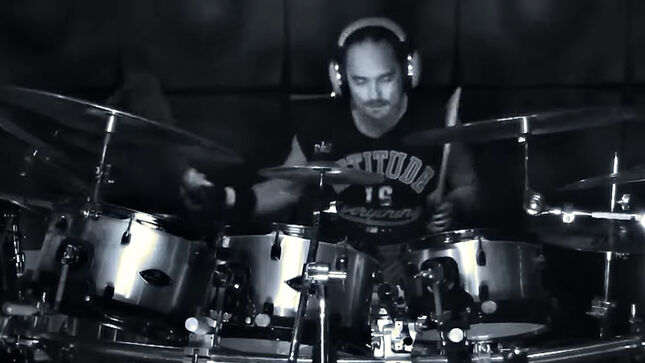 Menza Nation has shared unreleased private video of late Megadeth drummer, Nick Menza, wailing away on Devils Island, preparing to get back onstage and in the studio with Megadeth for what turned out to be a second failed Rust In Peace reunion.

The footage was shot December 5, 2014 by Nick with his personal Zoom Q3 handy video recorder at his Disintegrator Studios in Studio City, California. Watch below:

The anticipated documentary on Nick Menza is now set for release in 2022. In the video below, This Day In Metal’s Metalhead Marv chats with bassist David Ellefson and film director Holly Mohehan. The documentary will feature footage of Nick as a child, growing up and playing in Megadeth.

Nick was a phenomenal drummer and inspiration for many future metal drummers. Beginning his professional musical career at the age of 18, drumming in the band Rhoads featuring singer Kelle Rhoads, brother of the late Randy Rhoads, Menza released his first record with Rhoads, titled Into The Future, in Europe in 1986.

Nick and David played together in Megadeth from 1989-1998 and appeared together on the albums Rust In Peace, Countdown To Extinction, Youthanasia and Cryptic Writings. Metalhead Marv is a reporter and historian and has been following Heavy Metal for over 40 years.

This Was My Life will feature rare and never-before-seen photos and video footage from Nick's archived VHS tape collection, personally filmed by Menza himself from 1988 through 1991. Included will be exclusive content showcasing Nick working at the studio, personal home movies, casual time and party time with his fellow bandmembers, as well as other well-known artists of the era that Nick toured with. A screenshot from the film was recently released that featured an interview with former Lamb Of God / Megadeth drummer Chris Adler.

"We are excited for the fans to see the life Nick lived before, during, and after Megadeth, it was quite the journey. Stay tuned for an epic documentary, as Nick would say, 'It’s gonna be rad!' Thank you everyone for the continued support in keeping Nick's legacy alive.