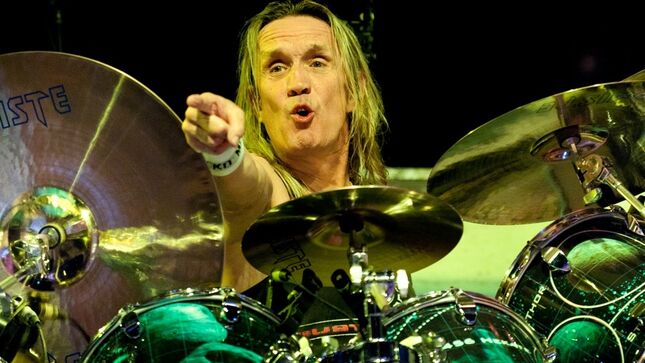 During BraveWords upcoming chat with Iron Maiden drummer Nicko McBrain about the band’s new album, Senjutsu, he reminisced about working with Martin “The Headmaster” Birch, who was with Maiden from Killers right through Fear Of The Dark. The treasured producer - who spun the knobs on Rainbow‘s first three studio albums, Black Sabbath‘s Heaven And Hell and Mob Rules and seven Whitesnake studio albums between 1978 to 1984 - passed away in August 2020 at the age of 71.


“Oh my gosh, Martin. Oh God, I love that man,” McBrain laments. “I’ll never forget, the first time I met Martin was when he was doing Number Of The Beast as I went to the studio and I met all the boys. Later, when we were rehearsing in Nassau, Martin came over to visit with us before he went over to the studio to get everything set up for us. He said to me, ‘Right, dear boy, what is your favourite snare drum sound? What snare drum sound would you like me to get?’ I went, ‘That is easy—Alex Van Halen, please.’ And he turned around and went, ‘Who?’ (laughs). He was joking, of course. Anyway, ‘Who?’ No, I love Alex’s sound; that is my all-time favourite snare drum sound. So if you can get my snare sounding like… and I use a 402 Ludwig Supraphonic. And so I said the snare drum that Alex uses, the Bonham snare; John Bonham is famous for that sound as well. That was one great memory. And the other memories of Martin, with the drum sounds, were just, every time I would set that big kit of mine up in the studio, he went, ‘Do you expect me to mic the lot of those drums up? Can you get rid of a couple of them for me?’ (laughs). I’m like, ‘No! You’ve got all those widdly knobs in there. You get on with it.’ Oh, we had so much fun. He was one-of-a-kind. And sorely missed. He had basically retired after all the Purple stuff he did and all the other bands that he worked with. He kind of came back out for us and he stayed with us for many years, doing those records for us. And of course we ended up jumping in with Kevin (Shirley) in 2000 on Brave New World. So yeah, Martin was one-of-a-kind.”

Iron Maiden's Senjutsu album was released on September 3rd via BMG, and is available to order/save at IronMaiden.com

Senjutsu is available in the following formats: