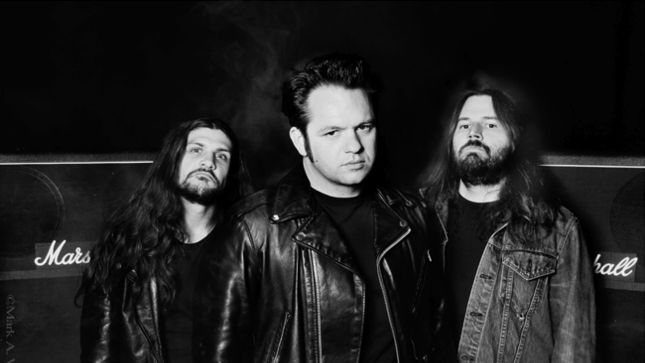 Steamhammer/SPV are set to start 2015 with a new promising US metal band: Hailing from the city of Ventura - an hour north of Los Angeles - Night Demon is a classic metal trio consisting of Jarvis Leatherby (bass, vocals), Brent Woodward (guitars) and Dusty Squires (drums).

The band has completed work on their debut full-length album, Curse Of The Damned, featuring eleven brand new original tracks, slated for release on January 14th (Scandinavia),  January 16th (Germany) and January 19th (rest of Europe) on CD, LP (+ bonus track) and download. Curse Of The Damned will be released to the world outside of Europe via Century Media.

Night Demon unite the three members’ musical inspirations and influences ranging from old-school metal greats such as Iron Maiden, Metallica, Diamond Head, Angel Witch, Riot and Saxon to punk legends The Misfits. But whilst the band's music proudly exhibits these roots, it does so in a manner contemporary with modern times in every aspect.

Night Demon released their self-titled debut EP in April 2013, and to coincide with their massively extensive Europe tour of spring 2014, they put out an expanded edition of the EP with four additional tracks. The European tour saw Night Demon successfully sign a European record deal with Steamhammer/SPV. They are currently garnering new converts in every town on a full North American fall 2014 tour with Raven, and are primed for plenty of solid worldwide touring in the immediate and long-term future.

Curse Of The Damned tracklisting:

"Livin' Dangerous"
"Mastermind"
"Run For Your Life"
"Killer"
"Save Me Now"