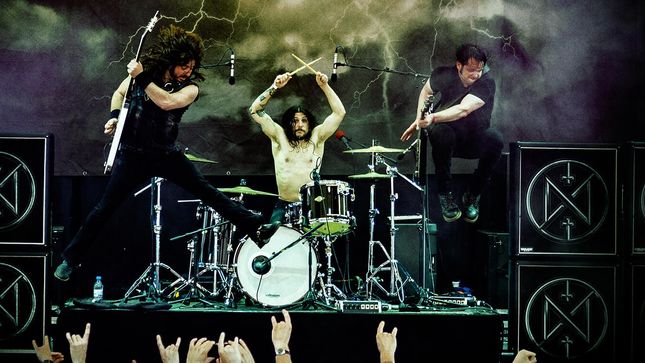 Today, Night Demon announce the worldwide release of their new single, "Empires Fall", via Century Media Records. It’s been three long years since Ventura, California’s Night Demon unleashed their second studio album, Darkness Remains. In the interim, the trio brought their old-school metal attack to stages around the world with a fierce and indomitable work ethic.

Now, at long last, Night Demon answer the prayers of their rabid fanbase by unveiling their first new music since April 2017. “Empires Fall” is a quick-hitting, take-no-prisoners track chronicling the demise of the record industry and was mixed by Josh Newell & mastered by Brad Boatright. Punk legends, Lars Frederiksen and Matt Freeman of Rancid, as well as James Paul Luna (Holy Grail) also contributed background vocals to the track. Watch the lyric video for "Empires Fall" below.

The single is available as a 7’’ vinyl version, including a cover version of Le Griffe’s “Fast Bikes” on the B side, as well as digitally on all streaming platforms. You can order your very own copy, or stream the track here.

"It's been three years since Night Demon has released original music. We've spent that time touring the world many times over, but all of that is sidelined now for obvious reasons. I present to you 'Empires Fall'. Our first offering of 2020. Enjoy" - Jarvis Leatherby 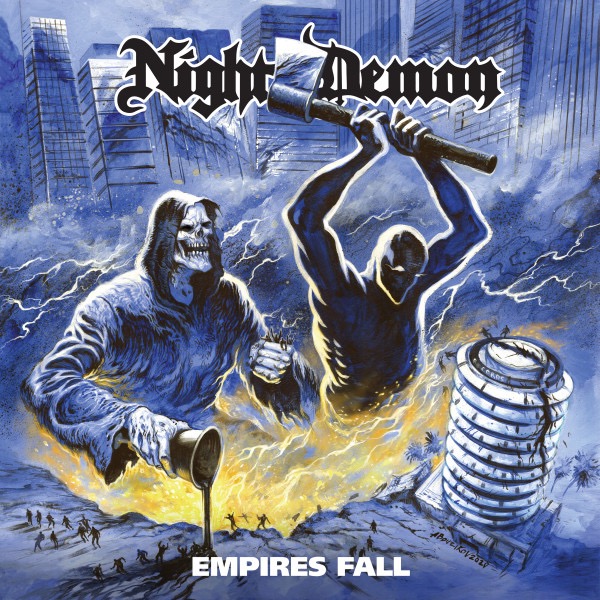 The brilliant hand-painted cover art by Andrei Bouzikov is the icing on the cake for "Empires Fall", evoking images of Godzilla and Mothra terrorizing Tokyo, but with an irrepressible Night Demon twist that dovetails perfectly with the song’s lyrical content.

Although the global coronavirus crisis has temporarily grounded their tour plans, the band are plotting their triumphant return to the live arena, including select festival appearances in summer 2020. Empires may fall, but Night Demon still stand tall.