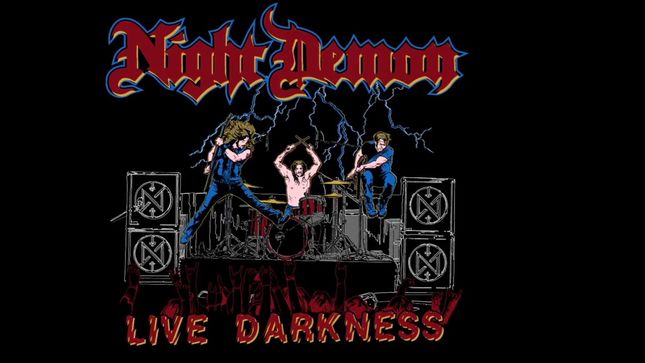 Night Demon will release their new triple live album Live Darkness on August 10th via Century Media Records/Shadow Kingdom Records in the US. The track "Screams In The Night" is available for streaming below.

Live Darkness will be released digitally as well as limited edition vinyl and double CD digipak. There will also be exclusive pre-order bundles available here.

Limited Edition US configurations include:

Ripping through a blistering 90 minute set, Night Demon wowed concertgoers with a comprehensive, career-spanning setlist including their entire debut EP, 2013’s Night Demon, “Full Speed Ahead”, "Screams In The Night” and “Mastermind” from 2015’s Curse Of The Damned, plus “Hallowed Ground”, "Black Widow”, “On Your Own” and “Welcome To The Night” from their current release Darkness Remains.

“Screams In The Night":

“Life On The Run" video: