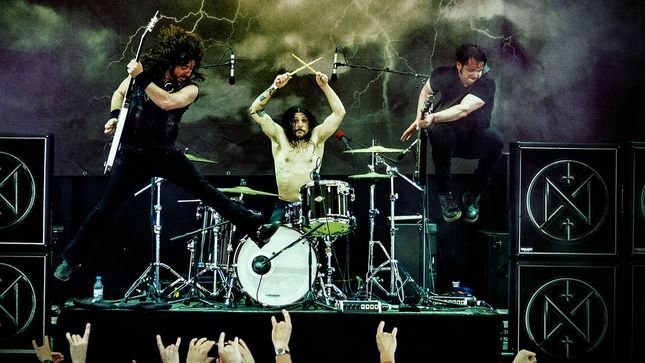 Last week, BraveWords reported that the next full-length, The Year Of The Demon, is scheduled for release on April 15th, 2022. Side One will contain (new versions) of the four singles issued individually, during he pandemic and the second side will be one long song.

Jarvis Leatherby (bass/vocals) explains: "The other side is a concept. It's about the pandemic. It's basically one long song (split into four), but there's no breaks. It goes for 20:20." Twenty-twenty, Year Of The Demon...get it?

As we all know, Covid has played havoc with the music world: canceled tours/shows, band members separated, albums scuttled, etc. "All touring is pushed back one year," confirms the singer. "The Satan/Night Demon US tour starts in April 2022. If (pandemic limitations) are still iffy then, we'll roll the dice and do it anyway."

Discussing the current situation, he continued, "(Right now) we could play in Florida, and everything is fine, but when we cross the state line, our fans could be told, 'If you're not vaccinated, you can't come into the show.' We're not trying to get political, but we're not going to go out when our people might be segregated for their personal choices. Besides the occasional one-off, which might happen, we will not be on the road until April 2022. We are confirmed for the Rock Hard festival (in Germany, that June). We are the fourth band (on the bill) that day"

As disappointing as that postponement is, it's a minor inconvenience, compared to the situation for Irish/UK fans. It has come to light that Leatherby's exported Frost & Fire festival was going to take place in Ireland (where he's been holed up, throughout much of the pandemic). Never announced, but now tantalizingly revealed. Fittingly re-christened Frost & Fireland, it was scheduled for Jarvis' birthday (Feb 11th) at The Academy in Dublin. It is now penciled in for sometime during the summer 2022 and will contain the original line-up: Night Demon, Cirith Ungol, Satan, Visigoth and Jaguar.

Asked about the likelihood of a live concert video, Jarvis explained, "There were 9 camera angles (from the Live Darkness Cleveland show) and we have those files. I'm sure they'll see the light of day, maybe when that album has an anniversary. (On tour) we're going to be taping every show. We want to take the podcast on the road. We want to document things, as they happen. So I can see a pro-filmed concert (video) for this new album. We're going to get together, as a band, in October, to work on some music, actually for the NEXT album (after The Year Of The Demon) "

More immediate plans include culinary delights. "Cans of the Darkness Remains (6.5%) IPA, by Cleveland's Goldhorn brewery, will be premiered at the Decibel Beer & Metal Fest (canceled the last two years, due to Covid), next April, in Philadelphia. Originally it was way too high, like 8.9%, but we got it dropped, We also have a hot sauce coming out (Heavy Metal Heat, named after their song) from Hella Hot Hotsauce company, out of Oakland. When someone has an idea, crossing over to the food & beverage world, we're honored."

Night Demon fans, and the epicurean intrigued, can keep track of weekly developments via the band's podcast here.