NINTH CIRCLE Returns To The Studio To Record Fifth Album 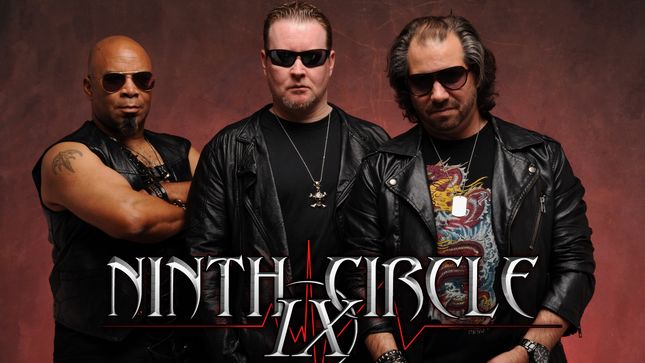 The Los Angeles melodic heavy band, Ninth Circle, have returned to the studio to record their fifth full-length album. They spent the majority of the pandemic shutdown writing material for the follow up of their successful Echo Black record which was released in June of 2020.

Bassist, Frank Forray, describes what the band went through during that time, “Being in lockdown was fucking miserable. At first you figured, two fucking weeks… fine. Then it just never seemed to end. I had done some fun online videos of “guess that bassline” from songs way outside of heavy metal such as, Burning Love from Elvis, Just a Gigolo from David Lee Roth and Nite Klub from The Specials. Playing these songs inspired me to start writing new songs for the next record.”

Frank goes on to explain, “After figuring out that we had a brand new record out in the middle for this miserable period and no way to promote it by playing live, I decide it was best to put my time and efforts into writing new material. A lot of the material just flowed out of me. In a matter of months, I probably had about 25 songs.  I started talking to the guys about getting together in the rehearsal studio and knocking out the new stuff. Luckily, the boys were up for it and we spent the better half of 2020 and 2021 jamming out new material.”

“One of the signature sounds of Ninth Circle comes from the brain and fingers of Mr.Dennis Brown”, says Frank while describing the writing process for the band. “Jeff Prentice, our producer, pointed out on Echo Black that we didn’t have a signature song like a Frontman or All or Nothing. Those songs come directly from the hands and brain of Dennis. Our songwriting styles are different. I’m a bit all over the place with thrash, power metal, and little bit of glam and straight ahead rock n roll. Whereas, when Dennis writes a song it’s very unique. You can tell it’s Dennis in the same way you can tell Eddie’s (Van Halen) styles. Once you hear it, you know exactly who it is.”

Drummer, Richie Brooks adds, "I feel like Dennis is like what Steve Clark was to Def Leppard. He has a signature feel and vibe to his songs."

Frank goes on, “So after hearing that from Jeff, I made a conscious effort to leave more space for Dennis to throw in some ideas and encourage him to really push himself this time. Dennis has crafted about five great Ninth Circle songs this time around. All of which I anticipate will make the record, they always do!”

Dennis adds" We are definitely looking forward to bringing these songs to life! With Richie now involved in the process, we've been able to focus our efforts on new ideas and songs that we all feel have great potential. We didn't force ideas where we may have in the past.”

“One of the things I’m really looking forward to this time is working with Richie [Brooks] in the studio,” explains Frank. “He’s a musician’s musician. He plays multiple instruments proficiently. He can sing like nobody’s business. He’s a super enthusiastic and positive guy too! It’s going to be a really nice adventure this time.”

Richie describes his thoughts on recording, "This will be my first go around with these guys and I really want to put out a great album!! I'm working hard on a lot of stuff in my drumming and trying to bring a little of each of my influences into the recordings. We are doing the recording a different way than usual for Ninth Circle. I will be last to record, so I will have a virtual blank canvas to work from. Should be a really fun time!