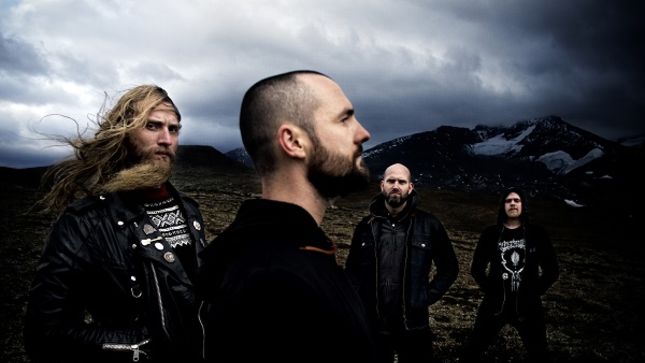 Dark Essence Records have debuted "luminauts", the opening track from amaran, the third full-length album from Norway's Krakow, which is due to hit the streets on both CD, 12" vinyl and digital formats on February 9th.  "luminauts", together with the recently debuted track "atom" from amaran, can be heard below.

With Thomas Hooper, one of America’s foremost tattoo artist, well known also for his paintings and designs, once again creating the artwork, amaran is an album that sees Krakow exploring both the calmer side of their sound, as well as the more experimental, drone side. Working with producer Iver Sandøy at Solslottet at the Duper Studio, Krakow have produced an album that is at times filled with dream-like soundscapes and at times with a harsh, sinister atmosphere.  Both Hooper and Sandøy also worked with Krakow on their 2012 sophomore full-length album, the critically acclaimed diin.

Krakow was formed in Bergen, Norway in the fall of of 2005, and today's lineup consists of highly skilled and experienced musicians with Kjartan Grønhaug on guitars, René Misje on guitars and vocals, Frode Kilvik (Aeternus, Vithr) on vocals and bass, and Ask Ty Arctander (Kampfar) on drums.

In comment made during the recording of amaran, Krakow had this to say: " The approach this time was in some ways different than during the diin sessions. We still record everything live as a band, but we wanted a bit more definition, less distortion, cleaner drums, more focus on the songs and melodies that lived within the compositions. The music is still dark, melodic and mysterious, but this time with a different angle".

amaran is now available to pre-order from Dark Essence Records at this location.