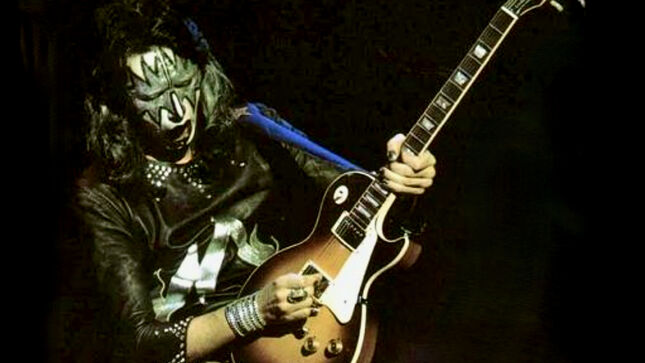 Starting on Wednesday, August 11 at 9 AM, Gotta Have Rock And Roll will auction "the most important Ace Frehley guitar to ever come up for public sale," Ace Frehley’s 1973 Tobacco Burst Les Paul Deluxe.

Back in December, 1973, after KISS was signed to their first recording contract, Ace Frehley bought this guitar from Manny’s Music on 48th Street in New York. Ace played the guitar heavily, with over 50 documented concerts from 1973-1976. Frehley loved the guitar so much he even carved the neck heel himself with a screwdriver.

In 1976, Ace went to Strings & Things in Memphis, TN and converted this Tobacco Burst Les Paul Deluxe into his new one-of-a-kind Black Double-Cut Les Paul nicknamed “Blackie”. From then on, the guitar can be pictured in Ace’s collection throughout the years.

Ace eventually sold the guitar and it switched hands from collector to collector until eventually, it landed in the hands of a good friend of Ace’s. He thought, after so many years, it would be nice to have the guitar reunited with the original owner. In 2015, Ace got his hands back on the guitar that debatably started KISS’s illustrious career. Ace immediately recognized his old guitar and was beyond happy to play it one more time.

The guitar is also signed on the back by Ace in 2015. The guitar comes with a letter of provenance, a letter of authenticity from Ace Frehley and a Gotta Have Rock and Roll Certificate of Authenticity.

(Photos - Gotta Have Rock And Roll)