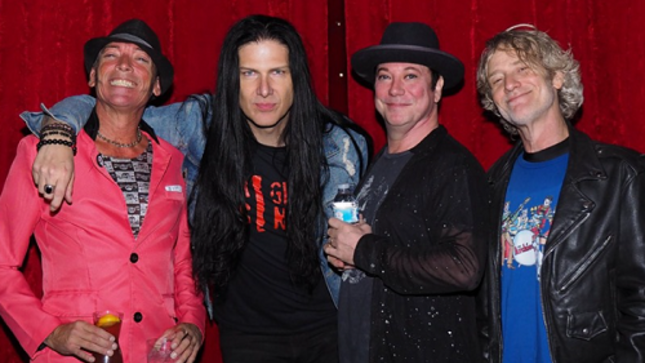 Original Sin will celebrate a decade plus of their debut album with a not to be missed concert at Count’s Vamp’d in Las Vegas, Nevada on September 4, 2021. What was originally billed as a tenth anniversary show, is now the 11 and a ½ year anniversary of Exile On Fremont Street. Original Sin is vocalist / guitarist Todd “Dammit” Kerns (Slash Featuring Myles Kennedy And The Conspirators, Toque), guitarist Brent Muscat (Faster Pussycat), bassist Michael Ellis (The Hellenbacks, Blotzer’s Ratt), and drummer Rob “Boom Boom” Cournoyer.

The sad truth is that the heart of the Original Sin, Rob ‘Boom Boom’ Cournoyer, is trapped in Louisiana due to an unwelcome visit from a hurricane named Ida. This puts Rob’s presence at the Original Sin Las Vegas show at Vamp’d this Saturday in the impossible category which breaks our hearts as much as it must yours. We have waited so long to celebrate the 10th anniversary of our album, Exile On Fremont Street, with you that this is beyond disappointing.

That said, the good news is that a member of the family has stepped forward to save the day. Our brother in arms, Corky Gainsford ,who you know from everything from Code Red Riot to Blue Man Group to Franky Perez to Todd Dammit And The Anti-Stars is stepping in to save the day. We cannot thank him enough.

Mostly, we want Rob to be safe back there and hope that his home and business is undamaged or as safe as possible. Please join us in wishing Rob the best and help us let him know how much he is and will be missed. We wish the best to everyone in Louisiana. We are thinking of you.

While we’re at it let’s welcome Corky to the family and thank him for bringing his many skills to the table and literally saving the day. As they say, THE SHOW MUST GO ON and by God this show is going on! We are so excited to see you and celebrate together like the old days. See you Saturday.

“I’m ok but the school isn’t. Cleaning up the mess. Bricks everywhere, broken glass, fallen trees all over the place. Sirens are non-stop. No power or water for the next 2 weeks at least. It’s catastrophic down here. Told Todd to call Corky. I’m not gonna make it. That’s almost as devastating as the building damage. Really wanted to play that show.”

Todd Kerns, and his wife Monique Kerns, have launched a GoFundMe campaign to Help Rob Rebuild:

"Hello, We are dear friends and bandmates of Rob Cournoyer and we are looking to help him rebuild his world, his life, his dreams. He moved back home to Louisiana leaving the big lights and glamour of performing on the Las Vegas strip with a dream to open a music school to spread his love of music, teaching and learning. That dream like many other peoples' was paused due to Covid-19 yet Rob kept moving forward with his plans full of positivity and hope. Now with the world slowly reopening Rob was just getting ready to finally open his school and realize his dream but then Hurricane Ida came and dashed his plans much more than the pandemic even could.

We love Rob so much and want to do whatever we can to help him at least start to rebuild his dreams.

Please join us in helping an amazing man and a very dear friend get his dreams back on track. He means the world to us and we want to help in any and every way that we can. The funds will be spent on repairing the flood damage, a new roof, replacing instruments lost.

Thank you from the bottom of our hearts.
Brent Muscat, Doc Ellis, Todd and Monique Kerns"