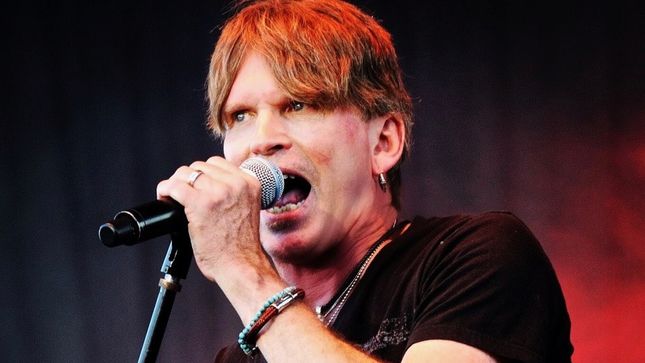 The voice on one of the most instantly recognizable and celebrated rock anthems, former Survivor singer Dave Bickler, discusses "Eye Of The Tiger", his solo career, and more in a new interview with Rockpages.gr.. An excerpt follows:

Rockpages.gr: When someone mentions your name, the two first things that come to one’s mind are: a) "Eye Of The Tiger" and b) the guy with the beret. Was it your idea to wear the beret?

Dave Bickler: "Yeah, totally. It was like a style, something to wear on stage."

Rockpages.gr: Of course, the video for “Eye Of The Tiger” helped a lot... what do you remember from that day or more specifically from that night of the video-shooting?

Dave Bickler: "Yeah, it was in the early days of MTV and by today’s standards it was a pretty low-budget video but it has a certain cool feel. We shot it in San Francisco... I remember it well... we went to a Thai restaurant. You gotta be careful when you are going to a Thai restaurant, especially if it is an authentic one... I remember taking a bite on one thing and I swear it was so hot, man... I couldn’t eat it!"

Rockpages.gr: Was it a long night?

Dave Bickler: "For some reason, I can’t remember the director’s name... I am sure we can look it up online. It was his idea... the whole video story."

Rockpages.gr: Were you surprised?

Dave Bickler: "I am surprised that almost 2 billion people have watched it." (laughs)

Rockpages.gr: Did you have the chance to meet Sylvester Stallone?

Dave Bickler: "Oh yeah. We recorded the song and he liked it. It was very close to the production deadline and he wanted to come down and link the song to the movie. We booked a studio, listen to the song, talked about the movie... he was really funny, charming guy."

Rockpages.gr: Are you a fan of his acting?

Rockpages.gr: So is it safe to say that Rocky III is your favorite from the brand?

Dave Bickler: "It kinda is because I am involved with this but I think it was cool that he wanted to freshen it up... it was amazing having Bill Conti on the first two films but it was cool that he wanted a rock band. I think it was a smart thing to do. I remember going to the theater to watch the film when it came out and after the song everybody stood up and clapped - it was amazing! I remember thinking that this would be the most incredible promotional vehicle of all time. I could see that coming."