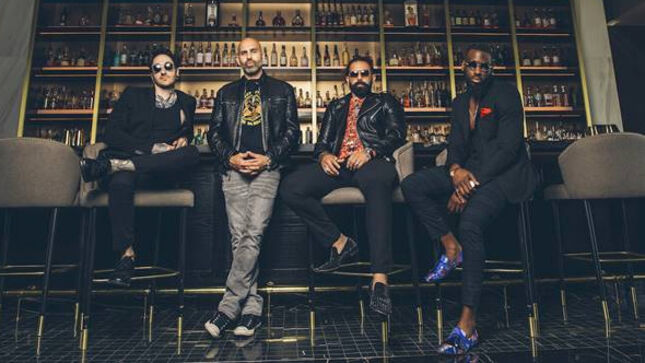 Otherwise and Mascot Records / Mascot Label Group have presented the second song to be revealed from the band’s upcoming new studio album. Watch “Exit Wound” below:

Singer Adrian Patrick shares, “I'd be lying if I said I've never sat at the end of my bed with a bottle of whiskey in one hand and a pistol in the other. The toll that life can take on you can be unbearable at times...but the beauty is in pushing through it, persevering so that others can draw strength from you. Your fate may already be written, so live your life like you're gonna die tomorrow... live your life like a fucking Exit Wound."  Lead guitarist Ryan Patrick reflects, “This life can be a complete mind fuck. I've dealt with depression and doubt for many years. ‘Exit Wound,’ to me, represents standing up, dusting the dirt off, and wearing my scars proudly. It is ok to not be ok. It is ok to talk about it. Just don't give up, and turn the volume way up in the meantime."

The Las Vegas quartet—Adrian Patrick [vocals], Ryan Patrick [guitar], Nick Bedrosian [bass], and Joe Conner [drums]—have weathered personal tragedy and trauma, withstood the tides of the industry, and still stand tall. If anything, the boys are stronger than ever with a one-two punch of airtight guitars, stadium-shaking grooves, and hypnotic hard-hitting hooks. Over the past decade, they’ve clawed their way through the rock ‘n’ roll ranks and emerged as an unbreakable force. Their catalog spans fan favorites such as True Love Never Dies [2012], Peace At All Costs [2014], and Sleeping Lions [2017].

“Honestly, we have lived every single note and each fucking lyric we’ve written,” Adrian declares. “We don’t have costumes or a gimmick. We’re just dudes on stage singing about what we’ve gone through.”

Otherwise inspire change in the world at large. Ryan and Adrian lead the 501c3 Life By Music, which supplies music programs with instruments. The guys visit schools, initiated a partnership with Gibson Guitars, and even have created the Guitar Magic coloring book.  “Hopefully, we’re creating an empowering environment where kids get the spark like I remember when music affected my soul,” Ryan goes on. “There’s nothing like seeing that. It’s cooler than anything we’ve done. It brings back the purity.”