PAUL GILBERT On The Future Of MR. BIG - "That's Not Really Where My Writing Style Is Going" (Video) 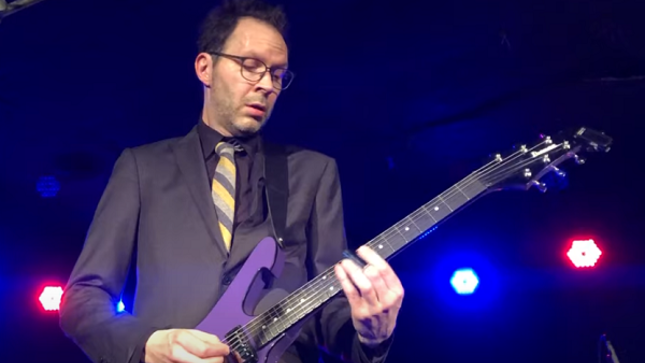 Guitarist Paul Gilbert (Mr. Big, Racer X) recently guested on The Chuck Shute Podcast for a career-spanning interview. Topics of discussion include playing drums with Cheap Trick, having a #1 hit, being named one of the 50 fastest guitar players by Guitar World, using power drills to play guitar, jamming with Aerosmith and Bryan adams, and more. Check out the interview below.

On the future of Mr. Big

Gilbert: "We had a single called 'Next Time Around', it was actually okay. We released that and then we did a tour, and that was great tour. Then, as as it went, I don't know... I didn't feel like it by the end of it. Like, 'I don't know what else we can do.' That's not really where my writing style is going. I think one of the things for me is my current musical passion. Although I'm a guitar player, my playing is kind of taking on the role of a singer on guitar. On my last tour I did 'To Be With You' and 'Green Tinted Sixties Mind', and I played the vocal line on guitar. And I remember the last time I visited Jeff Martin (Racer X). He wanted to jam and he had a band put together, and I said 'Do you have a ratchet set?' And he said he did, so I pulled a ratchet out as a slide and and I barely played any rhythm guitar I just doubled him. I doubled all his vocal lines, and that's kind of where my headspace is like I feel more like a singer playing that role with the guitar."

Mr. Big, is celebrating the 30th anniversary of their chart-topping Lean Into It album with a remastered and expanded anniversary edition reissue, available digitally, on CD and as a highly collectible limited edition box set made up of five individual colored 7” singles via evoXS.

The 30th anniversary release of Lean Into it includes the previously unreleased track, "Stop Messing Around", fully produced by Kevin Elson, from Mr. Big’s 1990 Lean Into It studio session. Check out the just released official lyric video below.

The million-selling album also contains the popular tracks “Daddy, Brother, Lover, Little Boy,” “Alive and Kickin” and “Green-Tinted Sixties Mind.” Lean Into It shows that Mr. Big could also strip away all the flash and 7-minute solos and simply create well-written songs with rhythm, groove and good melodies, making the band one of the iconic new wave of progressive “musician’s bands” who could play mind-blowing complicated riffs on their instruments at lightning speeds.

evoXS has remastered the album using the hi-resolution digital transfers from the original analogue master tapes for MQA-CD (2 CD), hybrid SACD, 180g Vinyl LP and Hi-Res digital. The hybrid multi-channel SACD plays on both SACD and regular CD players. MQA is an award-winning technology that delivers the sound of the studio. MQA-CD plays on all CD players. When a conventional CD player is connected to an MQA-enabled device, the CD will reveal the original master quality. The SACD has a new multi-track mix in 5.1 surround sound which provides the ultimate sound quality experience. The MQA-CD (2 CD) - Disc 1 contains the remastered tracks from the original album and Disc 2 contains the previously unreleased Kevin Elson produced tracks, “Stop Messing Around” and “Wild Wild Women,” hard to find bonus tracks and versions minus bass and guitar tracks, specially made for musicians to jam with.

Lean Into It MQA-CD tracklisting:

Lean Into It SACD tracklisting:

The Lean Into It - The Singles 7” box set contains four 7” colored vinyl singles with their European picture sleeves: “Just Take My Heart (edit),” “Daddy, Brother, Lover, Little Boy (The Electric Drill Song),” “To Be With You” and “Green Tinted Sixties Mind,” plus the bonus single “Strike Like Lightning” from the movie Navy Seals, which has never been released on 7” vinyl. The B-sides include the original hard to find tracks “To Be With You (live at NHK Hall Tokyo 1991)” and “Just Take My Heart (acoustic).”

The box set, which also includes a guitar pick and poster, is limited to 2,000 numbered copies.

Lean Into It - The Singles tracklisting:

Side A: "Daddy, Brother, Lover, Little Boy (The Electric Drill Song)"
Side B: "Road to Ruin"

Side A: "Green-Tinted Sixties Mind"
Side B: "Just Take My Heart" (Acoustic)