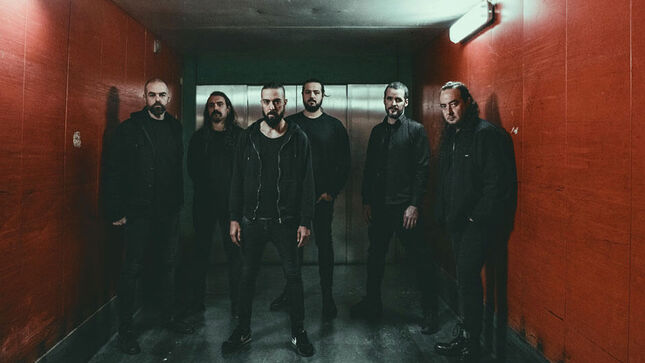 Andorra’s extreme progressive metal unit, Persefone, are known for technical precision at its highest levels, and with their newest single, “Katabasis” - out today alongside an astounding new music video created with the support of SDADV - draw dramatic, cinematic soundscapes mixed with electronic influences. The soft, clear vocals of Marc Martins alternate with sharp growls and bleak yet dynamic riffs. This ride ties in with the well-received first single “Merkabah” and leaves you anxiously awaiting Persefone’s upcoming album, metanoia, out on February 4.

Persefone on “Katabasis”: “"Katabasis" stands as the opening track of the new album and marks an important event when it comes to the concept of metanoia, as it led us to the depths of the being. This song displays many of the elements that can be heard throughout the album, and we hope that it welcomes the listener to the journey we want to offer with all this new music.”

Outstanding progressive/melodic death metal outfit Persefone is known for their band of rich soundscapes and technically precise work that sets new standards in modern extreme progressive metal. Founded in 2001, Persefone has released five studio albums, each one showcasing the band’s myriad of musical principles: high technicality, distinct melodies, plenty of head-turning riffs and musical acrobatics. The band has toured worldwide with notable acts like Obituary and Leprous, has hit stages at important festivals such as Wacken Open Air, Metal Days, Brutal Assault, ProgPower and 70,000 Tons of Metal, and is now set to release their new album, metanoia.

metanoia sets off with the opulent opener "Katabasis”, drawing dramatic, cinematic soundscapes mixed with electronic influences. The soft, clear vocals of Miguel Espinosa alternate with sharp growls and pierce through constantly changing riffs. Persefone balances soft passages with intense walls of sound on tracks like "Aware of Being Watched” - in which clean vocals and jazzy sections alternate with intense riffing carried by dense drumming - while solid, rich sound takes on orchestral dimensions on songs such as "Leap of Faith”. Vivid and dynamic instrumentation, tempo and rhythm make up the intense ride "Merkabah”, showcasing the band’s hardest yet most vulnerable sides as screams and blast beats are followed by soft instrumentation - spanning the song’s intensity to its maximum. A special surprise is the 11-minute masterpiece "Consciousness Pt III”, which continues a series of songs from the band’s fourth album Spiritual Migration (2013). The album closes with another opulent set of songs, "Anabasis Part I”, "Anabasis Part II” and "Anabasis Part III”. "Anabasis Part I” starts off with calm, dreamy piano sounds, drifting over to the intense "Anabasis Part II” and leading seamlessly into "Anabasis Part III”, gently closing the album with a cinematic outro.

Persefone about the new album: "metanoia is the next step in our personal pursuit for existential growth through music. This album is a call for a deep change, a call for an inner journey through fear and pain, a call for a leap into a meaningful and rooted place. Making this album has forced us to face many  musical and personal hurdles and fears, and the result of that confrontation lives within all the notes and words captured on this new chapter in our journey.  May you will find meaning in all this musical chaos.”

metanoia will be available in the following formats: