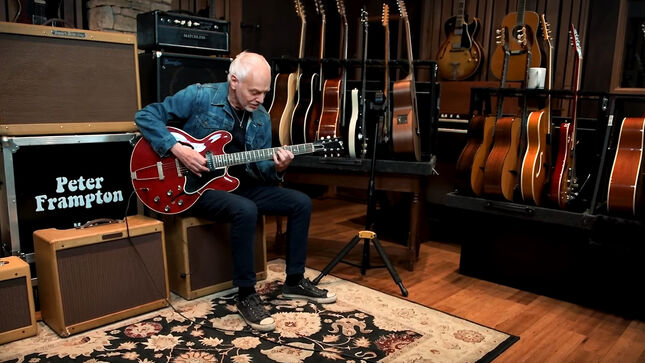 Grammy-winning guitarist, Peter Frampton, is coming to Reverb. Starting next week, October 13, the doors of Peter Frampton's Official Reverb Shop open to the masses, allowing fans to pick up a piece of the rocker's personal collection.

The shop will feature a slew of amps, guitars, and pedals that Peter Frampton has used in the studio and on stage over the years.

"I must admit that the reason for this is that I have over-collected," Frampton said with a laugh. "This is why I’m needing to not collect so much."

Many of the highlights from the nearly 40 pieces Frampton is parting with are beautiful vintage specimens, like the 1959 and 1960 Fender Deluxe Tweed amps, which you can see featured in the video below.

"I have a bundle of those 'cause I love them so much," Frampton says of the amps. "These two I don't really want to sell, but I've got too many - I can't play 'em all!"

Of course, the shop will feature some beautiful vintage guitars as well - including the 1961 Gibson ES-330 that Frampton is playing in the beginning of the video. Joining that guitar is a 1954 Guild Aristocrat that Frampton was inspired to buy after seeing Keith Richards play a similar model on the Rolling Stones' debut record, a Gibson Hummingbird, a stage-played Maton, and so many more.

Other finds in the shop will include:

- Two Marshall amp heads—one 20-watt and one 100-watt—that Frampton ran his Talk Box through.
- A Marshall 1974X RI amp that Frampton used on tour. "This amp was on the road with me on my co-headlining tour with Steve Miller," said Frampton. "It’s been out there with me, making my sound."
- A gaggle of newer 1x8 Fender Champ tweed combo amps.
- Acoustics including an Epiphone Zenith Masterbilt, Gitane DG-255 Classical, Gitane DG-255, and Gibson 12-String LG.
- Electrics including a Benedetto Bravo Deluxe and Duesenberg Double Cat.
- A collection of pedals: Toneconcepts The Distillery, Boss Dynamic Wah AW-3, Fat Boost Pedal, Fulltone PlimSoul, Boss Guitar Synth SY-300, Morpheus Bomber, and many more.

Check out the full video below to see Peter Frampton talk through some of the highlights from his upcoming shop, and be sure to drop your email address in the sign-up form here to be the first alerted when the shop goes live.