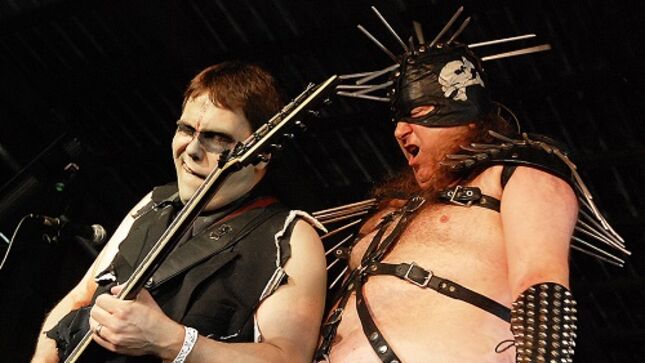 Annick Giroux - who serves as the editor of Morbid Tales fanzine, as well as the vocalist for Cauchemar - shared the tragic news, along with the following image:

"I have some sad news for you guys... Our beloved Gord 'Piledriver' Kirchin has passed away today. I am so heart broken. I had the honor of knowing him for a long time; booked Piledriver a few times, designed some merch for him and even did the reissue of Metal Inquisition. I got to know him well and he was such a sweetheart. He was an amazing musician, and was well loved by his wife, family and friends. Gord, you will be missed so much... fuck. I wish I could have said goodbye. It truly hurts...

Please, everyone, spin Metal Inquisition, light one up in his honor, and celebrate our dear friend Gord!"

Earlier this month, just prior to the Labour Day long weekend, Piledriver founder / mastermind Gord Kirchin posted what looked like a reassuring update:

It's been a brutal chemical battle, chemo reeeeally sucks, but we near the end of the war! Three weeks of horrid yuck from its side effects, then in six weeks we scan to see if we got it all. I'm not without my battle scars to carry for the rest of my days; severe scarring in the lungs from the initial infection on top of the scarring from radiation, and it severely reducing my oxygen uptake leaving me gasping after even light exertion, and the radiation damage to my esophagus, windpipe and throat possibly ending my live singing career... so... gonna have to shift gears and purpose. Anyone need mixing / mastering / turd polishing done? I'm your old school man!

The crux of the biscuit is I'm alive! I'm still here! I'm vertical and mobile! I still got me some great living to do! Let's get past the next 8-10 weeks of recovery and get back to living!!!

Heartfelt thanks and profound appreciation to and for my hundreds of supporters in this battle, you made it easier to keep my spirits up and positive and surely aided conquest in my battle! Thank you!!! I love you all!"

“If you ain’t a metal head, then you might as well be dead”, proclaimed Canuck thrashers Piledriver in 1984 when they released their legendary debut, Metal Inquisition. In late 2021, Shadow Kingdom Records made the album available again as a digital download, cassette, CD, various vinyl versions, along with new apparel.